I've been pondering for a week about whether I wanted to post on this subject. I'm not the type to leap to conclusions or exaggerate--but, I saw one of the legendary Big Black Cats. (Picture from internet.)
Last Friday, I got up about 5:30 am to go to the bathroom. As I came back to bed, I went up to the window to pet Snuffy who was lying in the heated cat bed in front of it. I looked out the window (as I always do) to see any wildlife that may be around.
The big black animal appeared so suddenly I didn't realize what I was seeing right away. It was as large as a German Shepherd as it crossed the clearing in the wooded lot below. It was in view for only two seconds before it melted into the brush, but I would swear that it was a cat! It had a long black tail that extended straight out from the body and the gait was definitely cat-like. I did not get a good look at its head however.
I admit it was quite early and there wasn't full sunlight yet. Still, I am positive about the size of the animal. I have seen my own cats down in that same lot and the size difference is indisputable. The distance from the window to the spot where I saw the cat is only 20 to 25 feet.
The picture below was taken out of my bedroom window at my eye level but in the afternoon. It shows the wooded lot that is separated from my yard by a retaining wall that drops down 3 or 4 feet. The retaining wall is about 10 feet from the window. The wide clearing is due to a large black walnut tree growing there that prevents most other vegetation from growing under it. The cat walked from left to right in front of the tall grass (hidden by afternoon shadows). 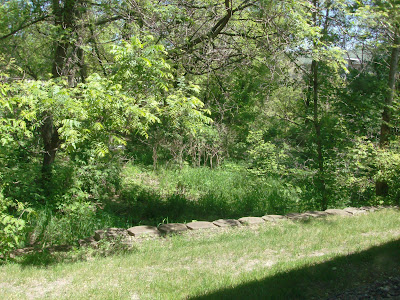 I first became aware of the Big Black Cats phenomenon from an episode of MonsterQuest on the History Channel. MonsterQuest documentaries examine a variety of folklore and creature sightings around North America. They have featured the Chupacabra of Mexico, Sasquatch of California, sea monsters in Lake Champlain and other places, the Jersey Swamp monster and Mothman of Ohio. The Big Black Cats are in (admittedly) spurious company.
Therefore, when I was at the Wildcat Sanctuary last Saturday, I spoke with Tammy Quist who is the director of the facility. I asked her about the Big Black Cats and told her I saw one. She said that the producers had consulted with her on the production of that MonsterQuest episode. She felt that they had proven that it was only a matter of mistaken perspective. I was disappointed by that since my sighting was at very close range with an accurate perspective.
So, the upshot of it all is this: I saw a Big Black Cat only 20 feet or so out my bedroom window! Now, I will always and forever be looking for it. And, I will never see it again...
Posted by Ms Sparrow at 7:11 PM

Allen and I read this with great facination. I too have seen a large cat. As I was driving to work 1 night, a large cat like creaure crosed in front of the van. It was just on the outer rim of the beam. It was most certainly a cat, as it had the definate cat walk. I thought maybe it was a cougar, yet they really are not that indingenous to this area.
So, I to keep my eyes open for another.

Hi Chic, There have been some cougar sightings in Minnesota. However, Tammy Quist says there is no such thing as a black cougar. There's been speculation that black jaguars may have made their way up from Mexico. I wonder if a jaguar and cougar could produce offspring?

Back in the 70's, there were many big cat sightings in the Ashby-Dalton area. There was a family living there that traveled with circus animals in the summer. Some people thought that they may have big cats that escaped, but it was never proven.

My dear, there are black cougars. The call them "melanistic" mutations. We saw one here last summer, running with a baby jackrabbit in its mouth and chased by the mother jackrabbit. It seemed so surreal that we contacted an expert about it.

Our local wildlife expert, Burr Williams of Sibley Nature Center, says they are infrequently sighted but he certainly believes in them. I think your photo would be of great interest to other wildlife biologists and state veterinarians.

Dear Penniwig, I will have to do more research on the Black Cats.
I found it so interesting that the mother jackrabbit was chasing the cougar! I have seen an internet video of a rabbit chasing a rattlesnake and until it went up a tree to escape. I guess a mother will protect her young no matter what the cost.
Thanks for the info!

Whoa! That would have scared the daylight out of me! I'm glad you were IN the house when you saw the big lack cat, not outside with your "little" kitty.

Wow, be careful about letting your cats out! I've never heard of the big black cat phenomenon. That's pretty cool. I hope people leave them alone.

BTW, your blog is great!