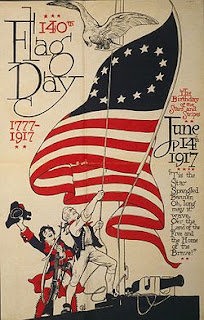 Some interesting facts about our flag:

* It's the most complicated of all flags requiring 64 separate pieces to construct.

* President Harry Truman declared Flag Day in 1949, however, it is not a federal holiday.

* It is not illegal to put a US flag across your butt--it's considered freedom of speech.

* The emails circulating that President Obama refuses to wear a flag pin or salute the flag are Hoaxes.

* Ours is the prettiest and best flag in the world!

You're a Grand Old Flag by George M. Cohan

You're a grand old flag, You're a high-flying flag,
And forever in peace may you wave.
You're the emblem of the land I love
And home of the free and the brave,
Every heart beats true 'neath the red, white and blue
Where there's never a boast or a brag.
Should auld acquaintance be forgot
Keep your eye on the Grand Old Flag.
Posted by Ms Sparrow at 12:31 PM

Interesting to read about your flag !

Makes me want to pull out my copy of Yankee Doodle Dandy !!!
Here in Fergus Falls, every national holiday honoring the armed forces, they put out flags to commemarate local veterans. It is quite a site to see driving past parks with flags lining the walkways and roads.

I love everything about our flag. It is indeed the prettiest on the planet.