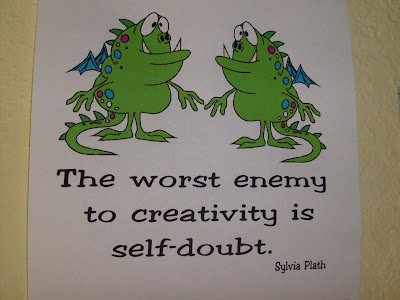 I was watching an episode of Law & Order--Criminal Intent last week when one character said to the other, "My mother always used to tell me that rejection is God's protection". (He was comforting his associate whose fiance had been sent to prison.)
I had never heard that expression before, and it kind of jolted me. As a writer, rejection is a dirty word. It's a kick in the stomach, a slap in the face and a whopping humiliation. Well, maybe not to all writers, but I'm the type who takes it hard. I have submitted only two things for publication and both were rejected. I have the nice (actually) rejection letters in a file folder marked REJECTIONS. The file folder is in a stack under a bunch of other file folders that are in more frequent use.
I have a lot of sayings and trivia up on the walls around my computer (as I've posted before). I made the one above with a graphics program and I see it every day. Somehow it seems that this sentiment is countered by another one I have on the wall, "Do you know how to make God laugh? Tell him your plans." So maybe God is laughing at me!
I'm pathetic I know, but if God is protecting me from being published, I'd just as soon it would stop.
However, I haven't submitted anything in a long time. And, there's that still, small voice in the back of my mind that keeps saying, "You aren't trying nearly hard enough!
Posted by Ms Sparrow at 9:51 AM

I have a fine with REJECTION in big red letters too :-)

Rejection is God's protection is one saying, but when it comes to submitting articles for publication, I'm going with "through enough s**t against the wall and eventually something will stick".

And thanks for stopping by my blog! I'll be back to visit again soon.

I think the saying has it totally wrong! It implies that all rejection is actually good for us. It isn't.

I don't submit often either, so I don't have nearly the pile of rejection letters others do. But I have them. Odd how we keep them, isn't it? What are we reminding ourselves of? Personally, I think it's a form of pride. We want to be able to shove those rejections back in the faces of those who gave them to us when we finally get published.

We slow up. We back away. But we can never really give up. Can we?