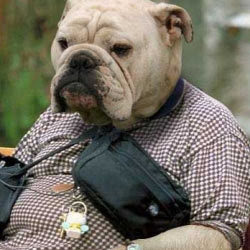 I don't know this guy but he looks really familiar. He might be one of the guys that tailgate in the parking lot outside the stadium where the Vikings play football. He also has a typical American look and probably appears familiar to you too. They say people tend to look like their pets so that probably explains the "hangdog" demeanor.

It occurs to me that as I blog, I merely react to events and various stimuli--like this picture. I don't really do anything creative or original. This worries me.

I like to consider myself a nice person, therefore I don't want to get into anything very controversial. That's not what Ms. Sparrow is about. I'm a non-confrontational person, a regional condition called Minnesota Nice.

Much has been written in Minnesota about our "Nice". Local news commentaries and editorials will deliberate (even agonize) over whether our Niceness is waning.

According to Wikipedia, it is characterized by forced politeness, passive-aggressiveness and false humility. Well! This observation was no doubt made by a New Yorker. There's a quote from Garrison Keillor, "New Yorkers think people from Minnesota are shy because we don't interrupt. New Yorkers interrupt each other all the time."

I find myself shut out of conversations all the time because I can't bring myself to interrupt. Of course, what I have to say usually wouldn't add that much to the conversation anyway (and that is not false humility.

I blog because I don't have to interrupt anybody to do it!

I have come to realize that "Minnesota Nice" is a lie. We only thought we were "nice" because there was a time when the state was made up almost entirely of Minnesotans. Now that so many people from other states/countries have come we find we aren't so nice after all.

What IS Minnesotan is the lack of confrontation. Regular Minnesotans are not that keen on it.

Yeah well as someone who used to go to the Boundary Waters every summer I can tell you that Minnesotans ARE nice, nicer than usual, and they are NOT fake nice. They are POLITE overall (there are always bad apples, prolly not even from Minnesota), and really, for amazing, you can't beat the Norwegian influence on Minneapolis and thereabouts.

Well, that wikipedia gives me a pain, any kook off the street can add in nonsense to it. I wonder how they were raised that POLITENESS and CLASS strikes them as false and passive-aggressive.

Ms. Sparrow, I have to take ye to task, you have a fine blog, and many times, people take awhile to hit their stride blogging and to find their niche. What you choose to post shows yr creative side, it isn't just "reacting," because you choose from the whole world and the things you post reflect yr mind and show its creativity.

Anyone can post a bunch of mean nonsense, but you have class. It's getting pretty rare, dearie.

Dear Ms Sparrow, I read every word of every blog posting you do. You must be doing something right, because I only get one paragraph read (if that) in some blogs.

Thank you, dear friends, for those kind words. I will take them to heart.

OK, I have decided this is an example of MN nice, AND I learned it from my mom. My gas bill was paid by check June 8. It was credited to my account and I am paid up. However, the money still sits in my checking account. So I have made numerous phone calls trying to find out why. My fear is that a number was enterred in wrong somewhere, and some poor soul got socked with an overdraft for bouncing a check. Everyone I've talked to agrees, HOW BIZZARE !! Both that this happened, and that I'm trying to unload the 85.00 from my checking account.