Today is Pearl Harbor Day. The sneak attack was 72 years ago and killed 2400 Americans  in a bombing that sank the battleship Arizona. I was a little over a year old at the time. The news stories today reminded me of my encounter with the father of a sailor who died in the attack.

When I was eleven years old, my family was living in a tiny town in Minnesota called Dovray. My dad was the contractor on a Norwegian Lutheran church being built in that farming community of 100 people. The town was really behind the times in 1950. My younger siblings all went to school in the one-room school house down the hill. (I've often felt envy that they had that experience while I had to make a one-hour long bus ride over to Westbrook for 7th grade.)

There was a general store called Smestad's Mercantile a block away. I was sophisticated enough that I knew how old-fashioned the store was compared to other places we had lived. It was just like the general stores I saw in old cowboy movies. On one side of the store the old man and his wife sold "dry goods" like flannel shirts and four-buckle overshoes. On the other side they sold groceries from a counter just inside the door. 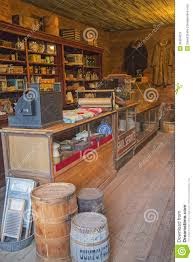 (Borrowed image)
There were open cardboard boxes of cookies and sheets of saltine crackers standing by the counter. The customer could take a brown paper bag and fill the bag to be weighed and priced. With no air conditioning and sealed packaging, the cookies and crackers were often stale. I don't remember if I was in Smestad's for cookies that day but I remember standing by the counter as he told me that his boy had been at Pearl Harbor when it was bombed. 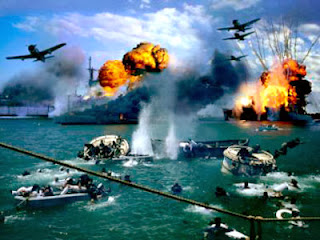 (Borrowed image)
He was terribly sad and I was very confused. I'm not at all sure that I responded appropriately. Being a kid, with the off-kilter sense of time kids have, ten years seemed so very long ago that I wondered why he was talking about it.

Now that I am 73, I realize how very recent his loss was and how much he was still hurting from that dreadful day.
Posted by Ms Sparrow at 7:26 PM 11 comments:

Back in the wooded lot...

I  haven't posted about the wooded lot for a while. Things were pretty quiet for a long time but now that it's turned cold, the birds and beasties are coming around. The main attraction seems to be the pan of water I set out every day. The squirrels, a large variety of birds and the four turkey boys come around to quench their thirst.

I recently started getting deer coming at night for a drink. I had a lot of family visiting over the Thanksgiving weekend and my grandson and three great-grands were delighted when three deer showed up outside my bedroom window in the early evening. There is a light on the side of the building so they were clearly visible. 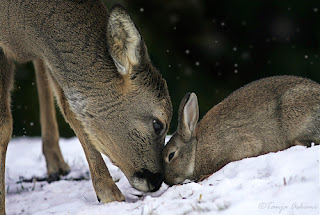 (Borrowed image)
So far I've only been putting out birdseed and bread or fruit scraps. With the loss of the bread thrift store where we were buying a trunk-full of stale bread for $5, I'm not sure how I'll feed them over the winter. I really hope I'll locate another resource somewhere soon. 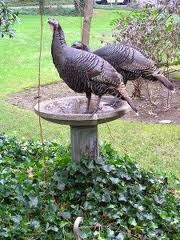 (Borrowed image)
Once we get some snow, the animals won't need the water anymore. Right now, with everything so dry there is a constant stream of birds and animals drinking at the water pan. I'm using the bottom tray from a large flower pot.

Sometimes I can hardly believe how very lucky I am to have all this wonderful wildlife right outside my window!
Posted by Ms Sparrow at 10:48 AM 9 comments: