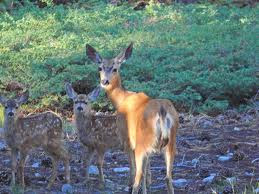 I've been enchanted by frequent sightings of deer and fawns this season but now I'm starting to worry. A doe and three fawns of different sizes were grazing in the neighbors garden at mid-morning.

This is worrisome because deer usually feed in the early morning or evening. Under normal circumstances, they avoid being out in the open--especially with young. The fact that they are often feeding in full view in broad daylight indicates that they are starving. In fact, the youngest fawn seemed quite thin.

There is a "green corridor" that crosses from St Paul up into neighboring Roseville, Minnesota. There are woodsy trails, lakes, parks and a dog park along the route. As a result, there's considerable wildlife in the areas surrounding it. I truly love being so close to it all.

Sadly, it seems inevitable that the DNR will be "culling" the urban deer herds this fall. It seems such an ugly fate for the dainty, lovely animals. The numbers have exceeding the capacity of the area to support them and they will starve.

The upside is that the venison will be provided to charities and food shelves. The hungry deer will then be feeding hungry people--and that is good.

Another year older and a little bit wiser

It's a little over a year ago that I crashed my car into another poor soul who had stopped to make a left turn. Both cars were totalled. I took the check and bought a nearly identical car that was five years newer from a used car lot. Thus began my long car repair history, much of it spent at Rosedale Chev. I don't even want to know how much money was wasted on keeping that used car running.

So it was that I had yet another appointment to bring it in for service on my birthday last Monday. (I spent $400 on brake work the week before but the check-engine light was on and it was shaking when in reverse.) The verdict was another $500 repair plus confirmation the transmission was on its last legs (which we already knew). It was obviously time to "pull the plug" on the car.

I had been laboring under the impression that if I treated the car well and helped it get over its past abuse and neglect, I would be rewarded with a dependable, well-behaved vehicle. This was childishly anthropomorphic of me, I know. It sorta falls into line with "putting it out to the universe" type thinking--that never works for me either.

Old Jewish saying,
"Do you know how to make God laugh?
Tell Him your plans!"

Upon reaching this dreaded decision, I was in such despair I asked Chad, the repair-shop supervisor if they had a "crying room". However, upbeat as ever, he said they could set me up with a leased car and turned me over a salesman to get the information. Long story short, I wound up buying a new car. It took half of my savings account and I'll be making car payments for the rest of my life, but I will have reliable transportation.

I'm telling myself that I did my bit for our economy. I just wish I could feel better about it.