I recently went to a Halloween party for the first time in thirty years. A guy from my SF Writer's group had the bunch of us over and I had a great time. I didn't have a costume so I just wore my Garfield shirt.

I am really impressed with all the clever cookies that I've been seeing online Here are a few of my favorites. 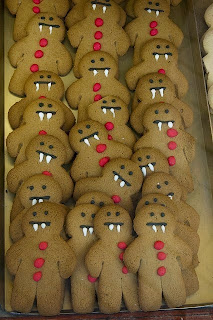 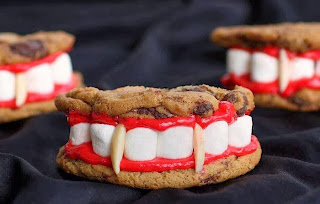 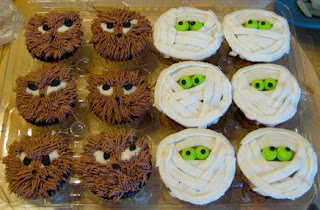 Four years a blogger and still not quite doing it right!

It was four years ago today that I posted my first blog. I was quite enthusiastic and titled it, "Hallalujah I'm a Blogger!" I didn't have any followers at the time so there were no welcoming comments, but I was undeterred. I wasn't savvy enough to realize that the way to acquire followers was to find other blogs you like and become their followers. It took me a while to "get on board" with other blogs.

Over the years, four or five of my favorite bloggers have died and more than a dozen have stopped blogging or just faded away. Every once in a while, I see I have a new follower but discover there's no link to get back to their blog. I've also signed on as a blog's follower on impulse and discovered that it's not what I hoped it would be. It's hit or miss, like paging through a magazine looking for an interesting article to read. It seems that the best place to find good blogs to follow is on your favorite blogger's list of followers. 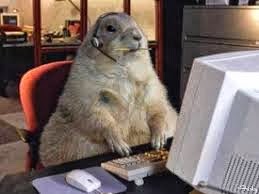 I noticed that the groundhog/woodchuck above has a Dragon voice recognition system. I tried working with a Dragon when I was going through a particularly bad spell of arthritic hands. I found it incredibly frustrating, and correcting the errors it made was more trouble than it was worth. It truth, the bigger problem is my arthritic brain!

So anyway, here's to year number five. May it be more productive and interesting than the previous four!
Posted by Ms Sparrow at 5:27 PM 20 comments:

The glass is greener

Once I was talking with a nurse who was the wife of a Baptist minister. She had recently returned from a women's group trip to Russia. She told me that she had been raised in a church that forbid drinking alcohol but all her life she had the notion that if she ever tasted alcohol, she would love it.

She said that every place the group went on the tour, they were served alcoholic beverages. Out of curiosity, she finally decided to try it. So she sampled everything they were served and, she announced happily, "I hated all of it!"

Personally, I don't like booze either. Back in my dating days, I tried beer and couldn't believe anyone actually liked it. I moved on to sweet "lady" drinks like a sloe gin fizz, Tom Collins or Bacardi cocktail. Nothing really struck my fancy. I much preferred soft drinks and they were cheaper. I also hated the feeling of being tipsy--the lack of control made me feel uneasy and vulnerable.

I came to realize that I didn't much like hanging out with drunk people either. At the risk of offending those who enjoy the light-hearted camaraderie of drinking with friends, it made me feel out-of-sorts. I hated having a conversation with a boozy-breathed, cloying, erstwhile "buddy" knowing that they probably didn't mean what they were saying and wouldn't even remember it the next day. Basically, I felt like I was being used and at the same time, I felt like an outsider.

After I was put on medications that restricted drinking alcohol, I had a valid excuse for declining whatever was being served. I figure that since I quit smoking in 1972 because of sore throats, I've probably saved a small fortune on booze and smokes. It may seem like those who like to drink and party have more fun, but I find going out to eat and a movie is more my speed.
Posted by Ms Sparrow at 4:04 PM 7 comments:

My three lovely daughters took a 5-day trip out to the state of Washington recently. They went to visit an uncle and aunt and cousins they haven't seen since the 70's. They visited Yakima and did the tourist thing in Seattle. As always, Brenda provided me with lots of good pictures.

A few months ago, I posted about chewing gum blobs all over the sidewalks. Several folks commented that there was a wall in Seattle covered with chewed gum. Well, here's Bren's photo at that very spot! 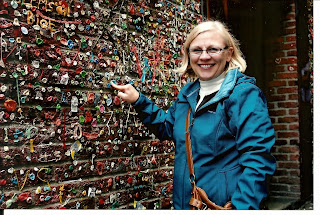 Here they are enjoying their lunch at the top of the Space Needle. Left to right-Brenda, Cindy and Paula. 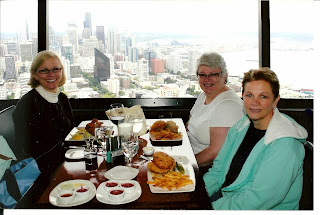 This is the Fremont Troll, a big tourist attraction under a freeway bridge. 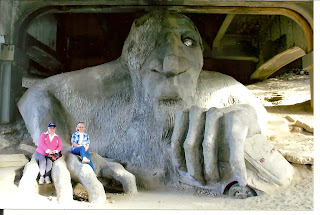 And, here is a shot out the window of the Lutsen Resort up near Duluth last weekend. Sue and I stayed at Bren's house and watched the family's five dogs while they were up there. 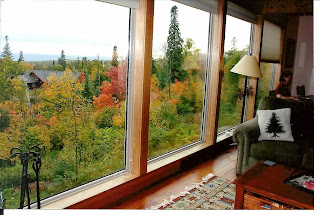 A peep from Ms Sparrow

I guess I've been sorta burnt-out on blogging lately. I'm approaching the 4th anniversary of "Ms Sparrow" and I'm still ambivalent about what she stands for. (Like, is she the sort who ends a sentence with a preposition?) Anyway, I blame my inner critic who won't let me get away with anything! I will be back.