On my sidebar, I state that all my kids and grandkids live in Minnesota. There is one notable exception, however. My grandson, Aaron managed to slip across the border and marry a sweet, small town gal from North Dakota named Jaime.

For their second anniversary, they took the long trip from the far side of ND to the Twin Cities for a vacation. Included in their itinerary was a nostalgic trip with grandma to Snuffy's Malt Shop. When Aaron was a kid, I used to take him and his two younger brothers there--actually, I took all my grandkids there whenever I had the chance!

Since Jaime has never been to the Twin Cities before, they're doing a lot of tourist stuff like the Mall of America, "Beauty and the Beast" production at the Orpheum Theater, a Smashing Pumpkins concert, Bubba Gump restaurant, general sight-seeing. 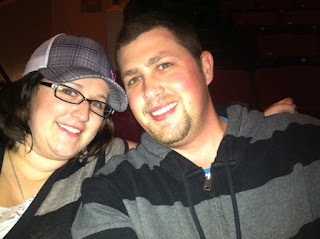 I told Aaron that I had a picture of him as a toddler standing next to my dad in his chair shortly before he died in 1986. Dad suffered from ALS (Lou Gehrig's Disease) and spent his days sitting in that chair. Little Aaron had rested his hand on the arm of the chair next to Dad's. Dad reached over and patted Aaron's hand three times. The little boy responded by patting Dad's hand three times. My Dad, as we say, got a big bang out of that.

Aaron then told me how he mostly remembered Dad's pool table in the basement and the big tapestry on the wall with the dogs playing pool. He really loved to look at it.

I was delighted to tell him that after the estate sale years ago, nobody wanted the tapestry so we just rolled it up and I stored it on my closet shelf.  We pulled it down and unrolled it for him. He is really tickled to have it since it's kind of an heirloom and he has the perfect place for it. I was so happy to give it to him! 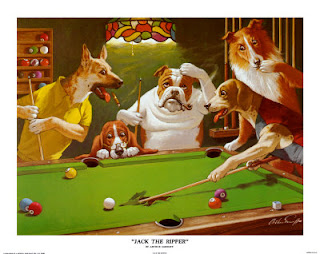 I'm going to have to keep looking for the picture of the sweet little boy who made a sick grandpa smile.
Posted by Ms Sparrow at 11:51 AM 16 comments:

We finally got some rain yesterday for the first time in months. It wasn't much, just enough to dampen all the leaves lying all over the ground, but it put me in the rainy day mood to bake some cookies. Of course, I ate a lot of cookies and then felt more depressed because of it.

The flocks of migrating American robins are now gone. Every fall they stop here to eat the dried crabapples off of the trees behind my place. There are other migrating birds stopping too, like white-throated sparrows and cedar waxwings. There is a constant flurry of excited birds while they're here, and then they're suddenly gone. 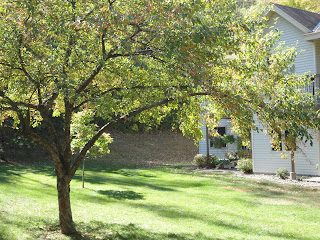 The only birds around now are the clutch of twelve turkeys who amble through once or twice a day. Some of them have tried to roost up in the tree but there was nothing to eat so they flew down again. I've been setting out pans of water during the drought and they will come up to my patio to get a drink. I haven't been able to get a good picture of them because they are in constant motion.
When all of the leaves fell from the black walnut tree, I noticed there is a new squirrel's nest at the top. Now there are four half-size little squirrels hanging around the tree. I feel sort of responsible for them. I've been feeding the squirrels for years and there are probably a lot more of them living here than if they were having to survive on natural food. I'm a squirrel mama! 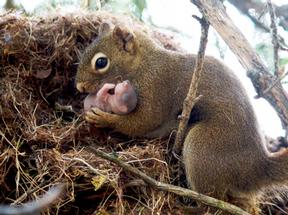 Borrowed image-this was just too cute to pass up!
Posted by Ms Sparrow at 5:35 PM 24 comments:

October 8th was Fluffernutter Day. It is a New England sandwich that combines creamy peanut butter and marshmallow fluff on white bread. I have never eaten one but since I don't like that all-American kid's favorite peanut-butter-and-jelly sandwich, I'm not really tempted. 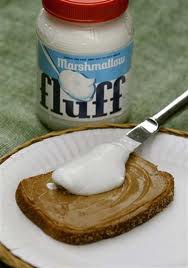 The Parade Magazine article gave the following recipe for a "gourmet" Fluffernutter sandwich.

On sliced brioche, challah or white bread, layer peanut butter, marshmallow fluff and thin banana slices. Close the sandwich and dust with white flour. Soak in 2 beaten eggs and coat with 1/2 cup panko. Then fry in vegetable oil until both sides are golden brown. Sprinkle salt on top and eat.

Although this sandwich would be way over the top, I must admit I'm a big fan of the ingredients. I have a toasted English muffin with peanut butter every day with my oatmeal for breakfast. I love peanut butter in all kinds of foods.

I have known people who hate shopping for groceries but I love grocery stores. I have been in dozens of local markets of various ethnicity, size and specialty. It is always interesting.

We have a large Hmong population here in St Paul. They helped the US forces during the Vietnam War and were brought here after being displaced to Laotian refugee camps after the war. In a visit to one of the many Hmong food stores, I found frozen giant bullfrogs. There was an amazing variety of strange and exotic foods that I could only speculate on edibility or use of.

Whenever I travel, I make a point of going into a local store to check out the different kinds of foods they offer. In 2005, my sister, Karen and I went to Iceland on vacation. We went into a grocery store in Reykjavik. I was looking for Icelandic candy to bring back for co-workers and friends. I was surprised to find most candies contained either cereal or cookie bits, but none with nuts. There was very little chocolate and nuts were non-existent--I suppose because they're expensive to import.

When I was in England some years ago, the grocery store I went into carried a large variety of fish. It was far more than a Minnesota market would carry. The amount of beef was very small and it was incredibly expensive, but that may have been soon after the Mad Cow crisis (1997).

I loved the variety of Cadbury chocolate bars especially the chocolate-covered shortbread cookies. I also discovered that what we call a Snicker candy bar was called a Mars bar. Our version of the Mars bar is different. I went on Google to research it and discovered that the Mars bar actually originated in England. There are now English and American versions of it and also Canadian and Australian!

My daughter Brenda went to a "Eurospring Quarter" at Oxford back in 1980. She fell in love with Lion candy bars and said she ate one every day. They are very hard to find in the US but I discovered that Brit's Pub over in Minneapolis sells them for $2 each. We can also order them online.