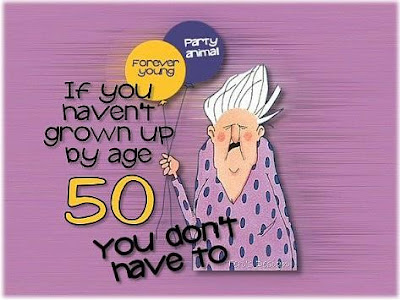 Somebody emailed this to me and it struck my fancy. But, it seems that the depiction of a 50-year-old is way, way off! The woman in purple ("When I am old, I shall wear purple") is too old. My eldest daughter is 50 and her siblings will soon to reach the half-century mark too. None of them are white haired, none of them are sagging and jowly. They are all energetic, vital people. They won't even be able to retire for 15 to 20 years.
I have found that as I get older, those younger than me tend to seem ever younger. High school graduates seem like mere children. Yet, I was married at that age. I'm frequently shocked to learn that some younger person is actually in their 40's or 50's.
The biggest change in my perspective is how I relate to people. When I was younger, I was shy and couldn't relate to anyone who was different from me. The few folks of different age groups, races or abilities that I encountered were so alien to me, I avoided them. I'm older and wiser now--cliqued though that may be. People of other ages and backgrounds can be so much more interesting than the folks just like me. (I can be such a bore, as in today's post. I try to do better tomorrow.)
Posted by Ms Sparrow at 10:41 AM

I am 50, but I don't sag, at least not to badly, I don't shuffle when I walk and you have to look at my face pretty intently to see a wrinkle.
I belong to a Youth Board at church. We were discussing getting ideas from older members of the church, you know the ones with kids who are married. I said, that would be me. They said no, you know, the ones that are grandma like , again I said, thats me. They all looked at me and said, we don't consider you in that category. Hallelujah !!!!!

PS, got my pasword figured out.

When I was young and in school fifty seemed ancient. Doesn't seem so much now that I'm there. My hair isn't white, although there are grey strands. And my skin doesn't sag, although it is no longer baby soft.

Like Sparrow Chic, most people are surprised to learn my age. I think this is because people assume fifty-year-olds look like the picture in your post. The truth is, that's more like eighty or ninety. I've seen plenty of sixty-year-olds who look forty.

(Also knew a 20-year-old who was nearly bald. And what hair he did have was white.)