Keeping up with Downton Abbey

I've had an especially busy week with several volunteer projects. What really consumed my spare time, however, was the obligation to Season 1 of Downton Abbey.

For some reason, I missed the first season when it was broadcast on Public TV last year. When they began promoting the second season, I realized that it was a series that I really wanted to see. I had been a fan of the Upstairs Downstairs series years ago and Downton Abbey follows the same premise.

So, I put my name on a waiting list at the local library for the DVD of the series. I was the thirty ninth person in line. As time went by, I checked occasionally to see how I was working my way up the list. The DVD could  only be checked out for seven days at a time so the process was still very slow.

The day finally arrived when I got the automated call from the library that I could check it out. The seven-day countdown began and I was pressed for time to watch it. On the fifth day, I sat down and started the first of the seven episodes. It was worth the wait! It didn't take long before I was totally entranced by the entire experience.

I love Maggie Smith in the role of the Dowager! She's an absolute treasure with a wonderfully expressive face that puts many younger actors to shame. It's worth watching the series just to see her performance.

Now, I just have to catch up with Season 2! 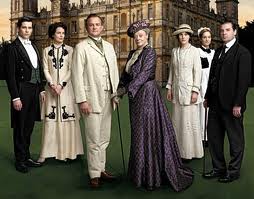 We watched the first series and were hooked...same with the second series. The series may not be historically accurate,and some of the plot lines are cheesey...but hurry up series three!
Jane x

Your grandson is a Maggie Smith fan also ( Harry Potter ). I enjoyed her in the movie -
The Prime of Miss Jean Brodie.

Isn't it great we have so many channels to choose from ? When it was only 3 major networks the variety was stagnent. And yet, some nights with all those choices, there still is nothing good to watch. Spoiled are we !

Unfortunately I did get to see some of the series through Netflix and enjoyed it. I only get about 3 channels and no PBS (antenna) so can't tune in to the series. Maggie Smith is a favorite -- I liked her in the 2004 movie Ladies in Lavender which also had Judi Dench.

Glad you enjoyed it, Maggie Smith is wonderful, quite stole the show for us, too.

You will adore season 2!! Our town is so hooked on this series!!
Wait until you see the last episode. Cannot wait for Sept. when it comes on again!! This series is addictive!

Good ol' Downton Abbey! Maggie Smith is brilliant in those sorts of parts - have you seen her in "Keeping Mum"?

I loved all except the wartime episodes, which were far too dismal and depressing for my idea of entertainment!

Thirty nine people, I don't even know this series, been out of touch with tv for quite a long time, although I recently started watching again, mostly criminal stories, I think it's the mystery which keeps me watching those and trying to solve a problem.

oh I do like Joanne Froggat ( anna!)
my http
?http://disasterfilm.blogspot.co.uk/