Today, being a girl is waaay more fun than it was when I was a teen! My granddaughters can experiment with different hair colors, decorated nails, an endless variety of cosmetics--and even tatoos!

My experiences were much tamer. Of course, I wasn't inspired to use much makeup since my mother never used anything but lipstick to "dress up".  Dyed hair and rouge were for hussies. When I turned 13, I began to use Tangee orange lipstick. It would turn a soft pink on your lips.

As I grew more adventurous, I would buy envelopes of hair tint to change the color of my hair. The result was so subtle that nobody noticed. The only way to curl your hair was if your mom gave you a Toni Home Permanent and then set it with Bobbi Pins.

When I got a little older, I became more daring and started using Maybelline mascara. The little box had the brush on one side and a strip of brown paint on the other. You had to moisten the paint and work it around to get it on the brush ( as I remember, I just used spit to get it going. I know--ewwww!) Note the use of the head scarf to hold the Bobbi pins in place, otherwise they were dropping all over the place.

For those awful teenage skin breakouts, I had a jar of Noxzema skin cream in the medicine cabinet. To this day, the smell of Noxzema brings me back to those years. For "personal daintiness",  the only deodorant I had was Mum Deodorant that came in a jar and had to be applied with the fingers. Thank goodness, the marketers eventually came up with the roll-on idea! 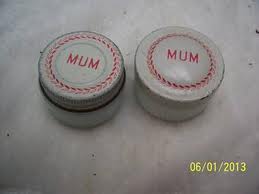 I certainly did not have a lot of confusing decisions on what to spend my meager allowance on during those years. I probably would have chosen to spend it on movie magazines anyway!
Posted by Ms Sparrow at 12:43 PM

Except for the Toni, and the deoderant, nothing. My father had an unreasonable aversion. No lipstick. No nail polish. When I did come home with nail polish he told me to take it off with scouring powder, but mom gave me nail polish remover. Wow. I forgot that.

That was so much fun! I remember those little mascara boxes - and you are quite right about how lots of people 'moistened' them!

Joanne & Elaine: Isn't it fun to look back with amazement and amusement?

I think you've just accidentally de-coded a character name for me in the film "To Wong Foo, thanks for everything, Julie Newmar..." Wesley Snipes, Noxeema? I don't know, I'm a bloke, and an innocent abroad.

Being a bloke is (maybe only was now) so much easier!

Owl: I loved that movie, although I loved Priscilla even more--maybe because of the Australian scenery. Anyway, being a bloke certainly gives a teenage boy fewer pressures regarding their appearance!

I remember seeing all these items in the corner dime store. Wooden floors, and cases of nuts and bulk candies galore, across the aisle of cobalt blue bottles of Evening in Paris and tiny little compacts and shiny tubes of color for lips.
Sigh...shopping then was such an adventure! Nothing was wrapped in plastic, sealed up tight.

Because of you, my teenage in the 70s was exciting and oh so adventurous. Make-up, fingernail polish and bleaching/haircoloring was a Saturday afternoon adventure. Thank You !

Corgi Mom: I have similar memories of the old-fashioned dime stores. You describe them perfectly!

Little chic: Even your experiences in the 70's don't compare with all the cosmetics etc. your little granddaughters have at their disposal! Too many choices!

Oh, my, this takes me back! My mother wore Tangee lipstick. I think that color was called "natural," and it's what I used at first, too. I had way too many Toni home permanents, and I used Noxzema until I noticed it made me break out even more. "Maybelline" was synonymous with mascara and I'm sure I spat on the brush, too. Had forgotten about Mum deodorant. Great brand name for the times: mum's the word and we're not gonna talk about body odor! Thanks for a great post.