For the love of movies

I've loved going to movies as far back as I can remember.  The first film I recall seeing was back in the mid-forties when I was six. In those days before television, most theaters would show three different movies a week. You could bet that at least one of them would be a comedy. Those were the days of Lucille Ball, Red Skelton, Danny Kaye, Bob Hope, Abbott & Costello, Ma & Pa Kettle and Blondie & Dagwood--and a host of others.

It was cheap entertainment and affordable, even for a family with four little kids. We lived outside of town in a rented farm house. Just getting dressed up and driving into town to see a movie was a big treat.

The film we saw was one of the black and white Blondie and Dagwood series. I remember sitting in the dark theater as the bumbling Dagwood is up on the roof. He starts sliding down and winds up dangling off the edge of the roof. At this point, my little brother Bobby started wailing loudly at Dagwood's plight. Even at that young age, I was terribly embarrassed. This served to imprint that moment firmly in my memory.

Sadly, many of the old comedy treasures are spurned by today's audiences. Those were the forerunners of all the TV sitcoms and comedy shows we love today. Those old comedies seem bland and hackneyed precisely because they have been copied ever since. 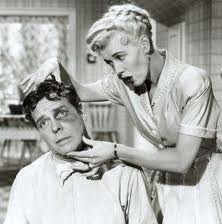 I don't of know Ma & Pa Kettle, or Blondie & Dagwood, but I loved watching the others! I just spotted that little girl, top right of your blog. It made me smile and it also brought a lump to my throat, in a good way. Thank you Ms Sparrow, you have really made my day.

Sunday afternoon at the movies! Mom would drop us off, we'd spend carefully at the concession counter so there was a nickle left to call for a ride home. Without warning to little children, the pay phone went up to a dime. My friend and I stood crying. A nice person gave us another nickel.

I work nights in a group home. Every night at 4am, CST for 3 hrs I get to watch I Love Lucy. And occasionally I see old Laurel and Hardy and 3 Stooges shows. Some of the humor is just as funny now as it was then !

I also grew up in a movie-going family and recall Ma and Pa Kettle. And I still love Lucy.