I guess that what I have here is a "variety" blog. I didn't start out that way and it used to bother me that I couldn't produce a consistent product (so to speak). I've since accepted it and decided to just go-with-it. That being said, I now feel obligated to maintain an ongoing variety of subjects.

Toward that end, today I will post about my next-door neighbors, the Gray Squirrels. (I googled "grey vs gray" and learned that "gray" is the American preference and "grey" is the British.) 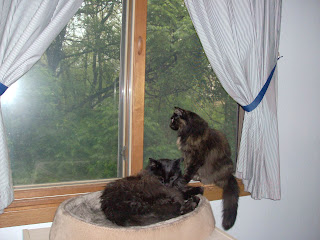 I'm blessed with a small wooded lot next door to my building. My bedroom window is only 15 feet from the retaining wall that separates the properties. This is wonderful for my three cats and me, especially because the lot is four feet lower so the branches of the trees are more at eye level. We have a great view of the birds and squirrels that live there.

Several weeks ago, I saw a squirrel in the lot pulling with all her might on a plastic bag half-buried under snow. She tugged from one side for a while and then moved around to the other side to work on it some more. After ten minutes, she finally gave up. I watched as she came running back and up into the nest (also called a drey) outside my window. She dived into the side of the nest where her babies were. 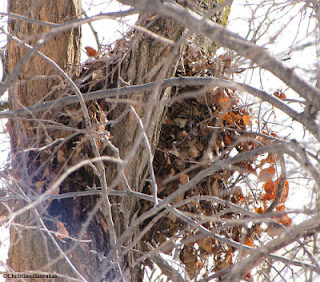 (Borrowed photo)
There is already a plastic bag over the top of the nest placed there several years ago by another protective mother. I had watched as she struggled up the tree with the bag flapping around impeding her progress. She straddled the bag and spent a lot of time and effort getting it in place. I'm sure it still serves to keep the interior of the drey nice and dry for the babies.

This leads me to wonder, is it typical behavior for squirrels to put a "roof" on a nest? Is this something that's being passed on from mother to daughter or is it an evolutionary leap? Which begs the question--if squirrels are capable of evolving, how many years will it take for them to develop the sense to stop running across the street in front of cars!?
Posted by Ms Sparrow at 10:19 AM

Wow. Waterproofing. I hope someone explains this. We have a bizillion squirrel nests in the woods around, but no plastic roofs.

I absolutely Love this post, and I like the variety of topics. I think I almost prefer (dare I say?) blogs with variety. Never know what you'll get. This is a fun post and asks an intriguing question. I had never heard of plastic bags as rooftops for squirrel nests, nor any squirrel roofs, for that matter. Very cool. I will open my eyes a bit more. Thank You!

I love this post, too, and I like your variety of topics. I never heard of a squirrel building a roof in that way, but it's brilliant! They already can outsmart every expensive "squirrel-proof" birdfeeder invented by humans, and they also ate their way through two kinds of roof vents before we managed to stop them with giant metal ones, so maybe it's just a matter of time until they wise up about crossing the street!

We don't get many squirrels around our way - just the occasional glimpse of one in the woodland across the road. Fascinating post - I love variety blogs.

It's a fabulous time of year to be a kitty.

Awesome! We have lots of squirrels around here but none quite as protective as yours. I love how Pearl said, "It's a fabulous time of year to be a kitty!"

I'm still laughing over the bobcat in a bucket picture!

Thanks for the smile.

As long as the squirrels don't start eating the plastic, that sounds very enterprising of them! I've seen magpies' nests with roofs.