The Hot Item this Christmas 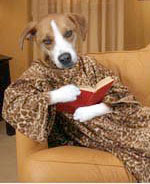 I admit I stole this off another blog. I have a weakness for dogs in people poses. And who wouldn't want a Snuggie for Christmas, whether man or beast?
It seems like every store is selling them this season. You find them in big box stores, clothing stores, grocery stores, online and on TV. In fact, I bought one at a Snyder's Drug Store recently in the UM Gopher's colors and logo. (But don't tell anyone because it's a Chrismas present!)
I still have to chuckle at the name because my kids used to inflict a kind of underwear torture on each other that they called a snuggie.
Posted by Ms Sparrow at 3:51 PM

I got one last year and have yet to use it. If I do put it on and move then I set off sparks and nobody will come close to me. So it is put away another year.

The Christmas doggy is too adorable for words...somehow, seems to go with a snuggie...!

That's so funny. I don't have one....but I think I might like one. Would a snuggie be the good old undie pull? :)

That appears to be an especially glamorous Snuggie. I used to have some kind of blanket-sack that kept me warm on winter evenings...but once I sat down in it, I never moved--too awkward, and as Abe points out, too much static electricity.

Ahhh, snuggies, I remember them well.
I still inflict an occasional snuggie on my family too.

Y'know..we saw one today at Walmart!
It was for dogs...wonder how they'd like it?

Carmella (the dog pictured in the Snuggie) has been miraculously appearing in many famous works of art on her blog, alittlebrownblog.blogspot.com.

I saw one for Chihuahuas, honestly!!! It was tiny! In pink and in blue...

I think those things would strangle me...but then again, maybe if I lived in a really cold place, I might be more appreciative of them...

I have a snuggie ... one that you put on your shoulders and wrap your arms up in and is all soft and snuggly. I've also experienced "THEE" snuggie! I'd much rather take the soft warm cuddly one over "THEE" snuggie anyday! I love my snuggie!!!

Could just do with a snuggie today. It's unusually cold here ! Would even share it with the dog !
I remember WW2 although we didn't have any raids We did have evacuees and soldiers billetted on us and everything was in short supply. I certainly remember the wonderful community spirit though

You are too kind, Ms. Sparrow, to post my portrait on your blog. I wish you and yours many Snuggie® moments in 2010.