Does belief in Santa Claus matter? 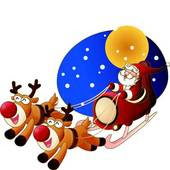 I love pictures of Santa Claus, they're are so colorful, bright and cheery. However, I never believed in Santa Claus as a child. My parents didn't encourage it and since there wasn't any TV in the 40's, we had little exposure to Santa. In addition, the prevalence of Santa images was waaay less prominant than today. So, Santa was just a cartoon character like Bugs Bunny or Porky Pig.
A friend posted that her 7-year-old son recently told her he knew there really wasn't a Santa. In her motherly wisdom, she told the boy it was true but that his older sister still believed in Santa so they should keep that a secret from her. Of course, big sister is in on the whole thing, so little brother is keeping his sweet secret--and loving it.
Now that is the spirit of Christmas! Even though the boy has lost his Santa image he still has the essence of what Santa means.
Posted by Ms Sparrow at 10:49 AM

Have you gone to Blogger Help about your side bar??


Yes, belief in Santa does matter!! Love him

Whenever one of my kids would question whether or not there was a Santa Claus....I would just so sweetly tell them, "When you stop believing....that's when Santa stops coming."

My daughter found out about Santa, the Easter Bunny and the Tooth Fairy at once. It was heart wrenching. But, I told her as long as she believed in Santa, there would be a special present under the tree. And, I didn't have to guess what she really wanted.

I raised my son not to believe in Santy. Yes yes, I'm such a meanie...saw too many kids cry their eyes out and be really, really upset, tho, so think it was the best thing to do...he didn't care...but he refused to believe me that there was no TOOTH FAIRY, of all things...insisted there was...

Dearie if you want yer sidebar wider let me know, it's easy to fix.

I have no memory of when I stopped believing in Santa (a hundred years ago) but I think it's sweet the little boy is keeping the secret.

Merry Christmas to you and yours!
xo

Your blog keeps getting better and better! Your older articles are not as good as newer ones you have a lot more creativity and originality now keep it up!