From the small to the tall 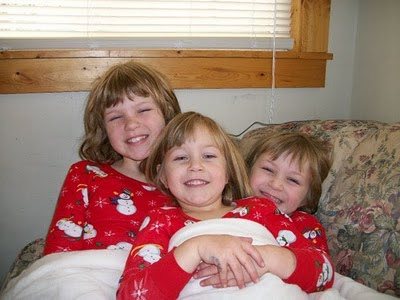 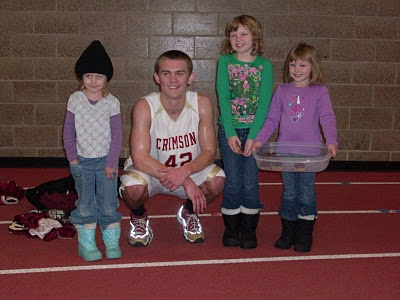 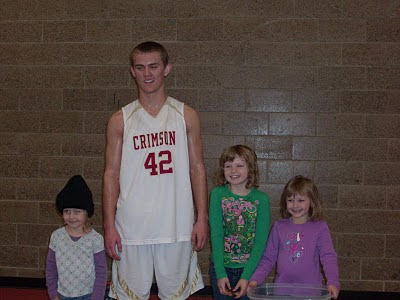 My three great-granddaughters are staying with me this week. We went to my grandson's basketball game and this was a totally new experience for the girls. Afterward, we took some pictures of the cool girls and the wet and shiny BB player.
Yesterday we went over to a nearby school that has an excellent sliding hill. The girls had a grand time sledding. When we got done, we headed back home to find that the power had gone out in the whole area. Since my place is totally electric, that means no heat, no lights and no cooking. We got out the candles and lit up the place but it was really nerve-wracking having all those fire sources around!
By suppertime, it was getting cold in the house and the girls were hungry. So, much as I loathe MacDonalds, I took them over there for an evening at the PlayPlace. We stayed until 9:00! This was not a good evening for me. I ate a lukewarm, soggy fish sandwich and listened to screaming kids for over two hours.
Adding to the general frustration was a man who was there with two women, a pair of toddlers and a baby. While all the other parents sat back and let the kids have fun, this guy was jumping up every 15 minutes and yelling very loudly at the two toddlers up in the "habitrail" for no reason. He was shabbily dressed and held up his droopy pants by the crotch to keep them from falling off. The two women ignored the kids. At one point, the guy decided he had to find the one of the kids and proceeded to climb up inside the trail where all the little kids were!

I was upset about this wildly inappropriate behavior but none of the other adults seemed to object. A few moments later, he emerged at the other end with the child. He took the little boy back to the table, set him down and the kid ran right back and went up in the trail again! This erratic behavior occurred a number of times over the evening.
Moral of the story: NEVER AGAIN will I take kids to that place!

Anyway, when we got home the lights and heat were back on. The girls were tired and went right to sleep when I put them to bed.
Posted by Ms Sparrow at 10:51 AM

OMG, screaming kids for two hours, Bless You! Your grandkids are beautiful, such happy girls and what a handsome BB grandson...and, a lovely day...

The girls love going to places like that because they are special. They seldom go, so they love it when they have the opportunity. You have another special place for the girls to look forward to going to. They will ask to go again.

Wonderful pictures! They are all so cute! There are many people with very poor parenting skills. I see it all of the time when I am out and about. It's a shame really.

Glad you got your power back!

I truly wish that as much as the government is in our business, it would take a hand and offer good parenting courses -- drop-in parenting skills centers -- drop in shelters -- drop-in counselors for our many mentally ill - it is awful to see inappropriate parenting, neglectful parents, etc. I am sorry you had such an ordeal, it is very upsetting for a long time afterwards to witness such things.

Beautiful kids!!! I would have gone crazy at McD's

Too bad you ran into a bad parent.... Hopefully the next time you take a little outing it will be delightful!

I have found some nice photos from 2007 and 2008 that I would like to use in my blogs but last night was a bad night for me and I didn't get much rest. Most of the time I had one coughing fit after another. I thought I would try to just say, "thanks" to those who stopped today. I appreciate the comments, visits and prayers. I hope things will get back to normal soon.