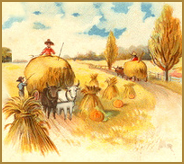 Back in 1948, I spent some time with my cousin on the farm in western Minnesota. It was haying time and her dad and older brother were busy in the field (although they had a tractor instead of oxen).
Obert and Virgil were working in a field not very far away from the house so my Aunt Gusta had us two girls take lunch out to them. My cousin had a darling new puppy that she had named Bitsy. Bitsy followed us out into the field, but apparently didn't follow us back.
Later, when the guys came in from the field, Virgil told us that Bitsy was run over by the haywagon and badly hurt so he had to kill the puppy with a pitchfork. My nine-year-old cousin shed a few tears at the time. But, it seems that I was more bothered about it than she was.
At our family reunion in August, I mentioned the incident to her. She didn't remember Bitsy. Even though I was only eight, the memory has stayed with me all these years.
I wonder if that's because kids raised on a farm see animals from a different perspective. The cousins had cats, but they were "barn cats" and not allowed in the house. They had batches of kittens up in the hay mow and never cared if they survived. The cats that showed up at milking time were given milk in a big dirty pan but otherwise had to fend for themselves.

I remember every pet we've had since childhood. I guess animals played a bigger part in my life than they did in my cousin's. She now lives in a condo and has no pets, while I live in a condo and have my four kitties. I feel kinda sorry for her.
Posted by Ms Sparrow at 10:05 AM

Ms. Sparrow, I have noticed that those I've met from farming and ranching don't have the tender hearts of those not involved in animal husbandry -- I think it's a protective thing, because to get attached would be to suffer...I feel kind of sad for them, too...they are missing the joy of animal companions.

Even now at haying, there is so much death! All the little mice and the snakes and who-knows-what!

I was raised in the country with strays all around. I did not develop the fondness for them as did my Mom and sisters. I did take care of my son's cat one time, but ended up giving it away as my allergies were so severe.
I do love all pictures of kitties though! ;D

Ms Sparrow
Poor Bitsy It would have stayed with me too
We've been following a story in the press about a sheep that was kept at a school as part of a project to teach the children about the food chain When it came time for slaughter there was a big discussion as the children had help to rear it , got fond of it and treated it as a pet .
I think it should have had a reprieve but sadly it was decided to sent it to the butchers to show the reality of life. A lot of the children were heart broken. Some said that they would never eat meat again

I remember distinctly the moment when I learned where porkchops come from. I was seven years old and the information made me sick to my stomach. I guess life is full of ugly truths, and the best we can do is be kind to as many animals as we can--including mice and snakes and barn cats!

The joy of reading older bloggers is these little steps back in time....