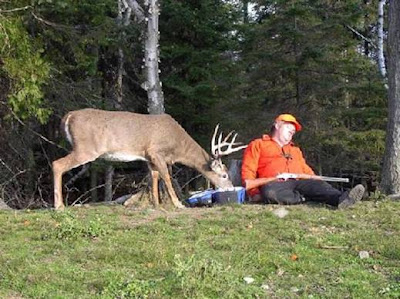 It's not only Harvest season and Leaf-raking season, it's also deer hunting season. I love this picture of contentment. Much as I hate the idea of deer being slaughtered, there are an awful lot of deer around. We sometimes have them wandering around the place and enjoy watching them.
But, sooner or later, somebody's going to lower the boom. When they do, I don't want to know about it!

They are such a beautiful creature...overpopulated I know too...but such an ugly season isn't it?

They're murder on cars, and cause accidents, but, one cannot think of deer without seeing sweet Bambi of Disney's fame.

Ohhhhhhhh, they're all sweet little Bambis. I know, I know, overpopulation and ... but, like you, I don't want to know.

That's something I love about living way out here in the middle of nowhere with no water anywhere and the ground water the same salinity as the ocean : NO DEER, so I don't have to be SAD during the deer hunting season, nor the dove hunting, duck hunting, bunny hunting, goose hunting etc etc seasons!!! It used to just tear me up where I have lived in the past.