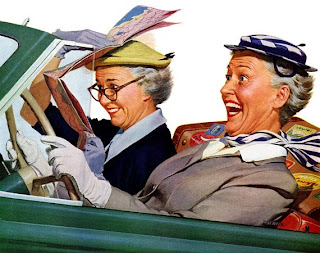 I love to go places. Although I have traveled some over the years, it's still not enough. (Actually, I'm not sure how a person determines when you have traveled enough.) However, since I don't have any extra income to pay for such luxuries, I felt that I had traveled as much as I ever would.
Two movies I've watched recently have given my wanderlust a boost. I watched the Darjeeling Limited with Owen Wilson, Adrien Brody and Jason Schwartzman as three brothers on a train trip across the Middle East. This was followed by the film Bonneville starring Jessica Lange, Joan Allen and Kathy Bates. They are three friends who take off on a roadtrip to deliver the ashes of one's husband with the usual incidents along the way.
Now, I saw this picture on a fellow bloggers post and that old feeling came over me again. I want to get in a car with a few pals and hit the open road looking for adventure...or at least a good time...or even a swell restaurant. I'm dreaming about a devil-may-care time where money is no object and everyone you see envies you because you're having so much fun.
Well, maybe I wasted my Sunday afternoon but I enjoyed it. Hope your afternoon was enjoyable as well.
Posted by Ms Sparrow at 2:34 PM

Hey there Ms. Sparrow. I know what ye mean, I'd like to fly away sometimes, too! I've traveled all over creation but would like to keep on rolling down the road.

Hard to travel cheap anymore with everything sky-high.

Back when I was young (and gasoline was only 33-cents per gallon) I used to get into my car and just start driving. I might go a couple hundred miles with the window down and the radio up. Too expensive to do that anymore.