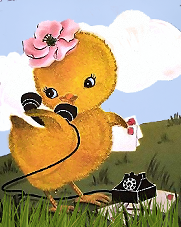 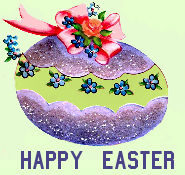 This little chick is on a rotary phone. Doesn't that bring back memories?
In 1945, when my family moved back to Minnesota from California, we stayed with my Aunt Gusta and Uncle Obert out on their farm near Appleton MN. Rural Electrification (REA) had not reached them as they lived on a lonely road that dead ended at a river. There were just two farms a mile apart.
I was only five but I remember the kerosene lantern suspended over the big round dinner table near the iron cook stove. A basket of corn cobs for fuel sat next to the imposing stove. Aunt Gusta would lift out the round lids to the "fire box" to stoke it up and cook breakfast for her family of seven and our family of six. What an effort it must have been for her! We ate oatmeal out of china bowls with fresh warm milk just brought in from the barn.
After several weeks, Dad found a job and a house to rent in Worthington. We moved to an old farmhouse that had electricity (but no indoor plumbing or central heat). We also had a telephone on the dining room wall. It was on a 10-party rural line, so when you picked up the receiver to make a call there might be someone on the line. We could easily listen in on neighbors calls--this was called rubber-necking and was considered only slightly naughty.
Anyway, after the REA finally reached Obert and Gusta's farmplace, they could modernize and use milking machines and no longer have to milk by hand. They now got their first telephone. The phone was a huge old fashioned type mounted on the outside wall of the lean-to porch off the kitchen. Like ours, it was on a party line. To make a call, they had to turn a little crank on the side to get an operator and then ask for the number. But, they had finally joined the NEW AGE.
The next big improvement on phones was to add the dial so you could place a call without going through an operator. That was the Rotary Dial telephone. Since there was no operator to intercept or screen calls, kids could now begin the practice of making crank calls. My siblings and I were no exceptions.
Three of our favorites were:

(If these don't make sense to you, ask a more "mature" person.)

You naughty country kids!!! I had no idea! Thought it was only the city slickers' urchins who got into mischief!!!

With those rotary dials, do you remember what a hassle it was if your phone number -- or the numbers you dialed often -- had a lot of 9's in them? They would take FOREVER to dial....trrrrrrrrrrrrrr (that's the sound it made as the dial returned from dialing a 9)!!!

We had central heat. It was called a coal stove. Later, we upgraded to fuel oil. Our central air was leaky windows, doors, and walls.

It was always fun as a kid to be on the phone and have some adult pop on and order you off, or they would tell your folks. And they knew your folks! And you had to get off, because kids weren't important back then. Now that I'm old it's the old that aren't important. Life threw our generation a nasty curve, didn't it?

Penniwig and Bevie, I got to thinking about how the rotary dial was replaced by the push button phone and progressed to speed dial. I wonder if the next step will be voice-activated dialing in which case it will (sorta) have come full circle.

Many of our computer appliances will be voice activated within ten or fifteen years, I suspect. They're tweaking out the bugs right now.

Another two-edged sword of technology.

Hi there ,
Enjoyed reading your post.
I use a voice activated typist as I'm so slow at typing never having had cause to learnin my youth. As well as being time saving it's amusing when it gets hold of the wrong end of the stick.( " foods full of enhancers" came up as "foods full of hamsters "

Happy Easter, J. Hope the day turns out to be gorgeous for you.