Another True Thing (When I got shot at)

Back in 1959, my  husband had a job interview in Duluth, Minnesota. Duluth is a port city on the western side of Lake Superior. There's a lot of iron ore and grain shipping traffic going out and coal coming in through the harbor.

I had never been to Duluth so it was a really big deal to travel the 300 miles and spend a night in an hotel. We arrived in the early evening and drove around sight-seeing. One of the iconic sights in Duluth is the Aerial Lift Bridge. It's unique because it's constructed so the entire roadbed is raised to allow ocean-going vessels to pass underneath. 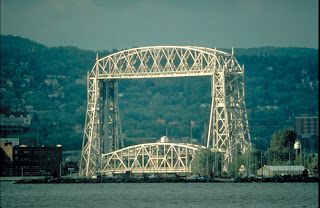 We drove across to the residential side of the bridge and turned around to head back. Just as we started across the bridge, we saw a man come running up behind us shouting and waving a gun. Then he started firing the gun at a man running up ahead of us. It wasn't until the man ahead turned around and started firing back at his pursuer that we realized we were in the middle of a gun battle. The bullets were ricocheting off the bridge girders around us.

We sped up and went to the other side and parked near other witnesses. The cops showed up soon after. By then, the man who was being chased had gotten away. The pursuer, who was barefoot, was out of breath and very angry as he told the cops what happened.

The victim owned a vending machine business and had made his collections for the day. He brought them home, kicked off his shoes and lay down on the sofa to take a nap. He woke to find the robber standing over him with a gun. As soon as the robber fled with the money, the victim grabbed his own gun and went after him.

The cops took our statement and we left. Afterward, we went to a bar to talk about it with other folks. We bought a copy of the local newspaper the next morning, but the robber hadn't been caught.

In retrospect, it seemed like the entire event was merely a part of the whole trip experience. We just went back home and left it back in Duluth. As it turned out, the job offered didn't pay a high-enough salary that the move would be worth it. So, I just filed it away in my memory as the only time I have been shot at. 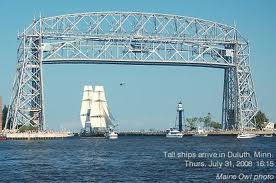 (My son is a "luthier" who repairs violins and string instruments. He once attended a small convention of luthiers in Duluth. He told me afterward, "I was the Lutheran luthier in Duluth."  He loves wordplay like that.)
Posted by Ms Sparrow at 4:06 PM

I'd comment but my tongue is in knots!
Jane x

A shoot out in Duluth? I didn't know it was such a wild town. Must have been a heart-stopping experience. I am so glad you're safe.

The airlift bridge is impressive.

Good grief! It's such a peculiar feeling to look back and realise that we're only here by virtue of living through crazy moments in our past! I love your understated account of "speeding up" (flooring it and ducking down more like)!

If you'll please excuse the typecasting Ms Sparrow then I shall forever picture you whipping out your own Smith & Wesson and shouting "Do you feel lucky, punk?" ...

Ms Sparrow, are you sure you don't have some English blood? All that 'stiff upper lip' stuff makes me think you must! How very frightening, to say the least, but what an exciting story.

Jane & Chris: Lutheran luthier of Duluth isn't as bad as Crafty Green Poet's reference to the Scottish Firth of Forth at Leith!

Janet: At the time, it was like being in the middle of a movie or TV show. I just experienced it as an observer.

Owl Wood: No way, man! I ain't no gun-slinging babe! In fact, I'm against everybody having guns at their disposal whenever they get upset!

Elaine: Duluth is a unique city in many ways. A great many Irish settled in St Paul (we have a huge St Patrick's Day parade) but there were a lot of Eastern Europeans that settled in Duluth.
As for having a "stiff upper lip"
my family just said I was "easy-going".

I love wordplay like that! I think your son and I would enjoy one another's company very much... and drive everyone else crazy. (I drive Jerry to distraction some times.)

I have never been shot at and I grew up in NY. Minnesota is a very dangerous place!

Mitch: You probably would get along famously. Mark can talk your ear off on any given subject.

Your post made me remember a time in Dayton, Ohio when we drove past a bar that had a shoot-out (actually I think it was a stand-off) going on in the parking lot. Guess I was like you... didn't realize the danger until after it was over. As for the play on words... I love it! I suppose my own blog testifies to my love of words.

Wow. That is quite a story. It sounds like a truly memorable city to you...

And I love your son's tongue-twister. :)

Scary! I've been in Duluth many times. Never been shot at though... :)