I'm an escapee from the Lutefisk capital of the world!

When I was a kid, Minnesota was a hotbed of Lutheranism. The countryside was littered with small white churches topped by steeples. The church usually had the parsonage (where the minister and his family lived) on one side and the cemetery on the other.

As the years went by, the old farmers retired, sold their farms and moved into nearby towns.The little family farms were absorbed into bigger farms. Fewer farm families meant the congregations declined until the remaining members couldn't sustain the cost of the building and pastor. The old church buildings and land were sold off and the only remaining evidence they ever existed was a small cemetery notched into a farm field.

When I was eleven, we moved to the tiny town of Dovray, Minnesota where my dad was the contractor on construction of a large new church to replace the old one. There was a single church serving the entire predominantly Norwegian Lutheran community. The old building, a typical white country church, was far too small for the growing congregation even with the basement. 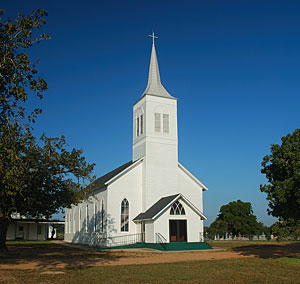 I have fond memories of the old church basements where weekly Sunday School classes were held, the Ladies Aid and church groups met, and church suppers were served. The most popular of these was the annual Lutefisk supper.

Norwegian immigrants had brought with them the exotic dish called lutefisk (loo-tuh-fisk) from the old country. In his book, "How to talk Minnesotan", Howard Mohr describes the dish thusly:


A translucent, rubbery food product with a profound odor, created by soaking dried cod in a solution of lye, although equivalent results are claimed for doing the same to gym socks." 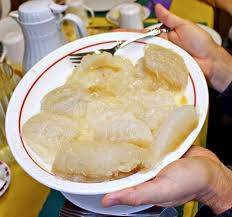 The oldtimers really loved their lutefisk with melted butter and potatoes. The suppers were so popular that arrivals had to take a number and sit in the pews upstairs while waiting their turn. The church basement was lined with rows of tables as the hungry throng slowly passed by the counter where the food was served. In the kitchen, on the other side of the pass-through, the church ladies were bustling to keep up with the demand.

Out of courtesy, those who did not want to put any lutefisk in their mouth were offered the option of meatballs. That's what I ate. To this day, I have sucessfully avoided eating lutefisk despite the fact I was born in Madison, Minnesota which claims to be the Lutefisk Capital of the World! (It may well be true since the Norwegians no longer eat it in their country.)
Posted by Ms Sparrow at 1:14 PM

I think I'd rather tackle the socks!

We lived near Minot, ND for a while... saw Lutefisk in the grocery and asked the butcher how to fix it. His answer... "I don't". So of course we had to try it.... once.

I have a dear friend who lives in Minnesota part-time. He just sent me a photo of a finnish lutheran church....and it was white! I believe I would also choose the meatballs!

My parents and some of their friends held an annual lutefisk supper in someone's home. My mother and one other person would only eat meatballs, and she never hosted because she didn't want the smell in the house. Good times, eh?

I really like that church building! I ate dried cod - just as it comes - in Iceland, it wasn't toooooo bad. It's the 'soaked in lye' bit that worries me.

Definitely sounds like an acquired taste. Pass the meatballs.

And it looks so pretty in the serving dish. Whodathunk.

Owl wood: I think it would be a toss-up between the cod and socks

Odd Essay: Yah, ND is lousy with Norwegians too! Glad you survived the lutefisk.

Jane and Chris: Maybe the Vikings brought the stuff to the Newfies?

Meggie: Almost all the Lutheran churches were white whether Swedish, German, Finnish, etc.

Blissed: I have heard tell of the tremendous odor and the results of badly prepared lutefisk turning gelatinous. Yuck!

Elaine: It's a pity that those old churches were so easily disposable--a sad American tradition. Your local churches endure for centuries.

Joanne: I admit it doesn't look that bad but I was never tempted to try it.

Joanna: I have seen gefilte fish in jars but find that equally unappetizing. I once asked the waitress at a Deli about it when my young grandson innocently ordered it and she said that it's mostly older folks who eat it. It's the same with lutefisk.

I didn't grow up a Lutheran, but as a fellow Minnesotan I can sure relate to this. So many social functions happened in the church basement. Usually I'm game for tasting any food offered, but I must admit, I've never tasted lutefisk.

This is a nice remembrance, bringing up some of my own childhood memories.

My husband is Finnish and he talks of that fish with disgust, I like Teresa am usually game, but not something soaked in lye although soap is made with lye but apparently there is a chemical reaction and the lye is gone once we use it.

Teresa: You might enjoy the "Church Basement Ladies" production at the
Plymouth Playhouse. It's a hoot!

Linda: I think you're supposed to soak the dried fish in water for some time to get the lye out. Makes you hungry, huh?

Lutefisk is a either you-love-it or you-hate-it food. We lived in Norway for 20 years but neither my husband nor I could get used to lutefisk. But their lamb meat was delicious. Feeding on herbs in the woods all summer long. Way better than grass fed lambs.
But I agree, the older I get the less I am interested in meat.

Ugh. I tasted lutefisk once... in Bergen, Norway. The smell wasn't as bad as I expected (but it was served in a restaurant) — but the taste and especially the texture were!

Hobbea: I never ate lutefisk due to the ick factor. I never eat lamb due to the cute factor.

Mitch: It sounds like the Spanish fare is far superior to what the old Norwegians ate!

I once read that traditional Norwegian food was usually white or off-white and flavorless. It is simply meant as a conveyance for something that tastes better. (i.e., fish balls/sauce; lefse/sugar & butter; waffles/strawberries, jam, whip cream). It does make sense if you think about it. Then again, it wasn't written by a great authority. It was a Norwegian-theme calendar.

My Dad's family is from that area. I can't quite gag that down either.

I have heard of lutefisk, but I didn't know it was soaked in LYE! LYE?!

I don't mind salt cod when it's turned in to fishcakes, but I don't know about this lutefisk. :)

I think I'd avoid lutefisk too.

I almost bought this fish in Ikea one day. My Norwegian-American friend from Minnesota rescued me from a fate she said had dire consequences (and when on to explain - gracious! That's some fish!)