I got an email from a gal I used to work with at the insurance company--the same one who sends me emails that threaten bad luck if I don't forward it to X number of people within X minutes.

Anyway, the current email extols the wonderfulness of all the hundreds of thousands of hunters populating Minnesota and our neighboring state of Wisconsin. The point being that with all of these guns scattered around the country, if we are ever invaded, those evil foreigners will have our rifles and shotguns to contend with, by golly!

This was basically the plot of the 1984 film "Red Dawn" in which the Russians invade Colorado (of all places!) and a group of teenagers fight them off with their hunting rifles and cowboy savvy. An updated version of "Red Dawn" is set to be released this summer with the North Koreans (?!) as the invaders. It remains to be seen how the teenagers manage to conquer the Red Menace this time, but it will surely be in the Hollywood tradition of the former version.

What is sadly out of whack here is that a real invasion would not be turned back by small arms fire from the hunters. It's a romantic notion that might resonate with the prime movie-going demographic, but the nature of war has become bigger and uglier with each passing decade.

Since I am not in the prime movie-going demographic, I probably will never know how it goes. 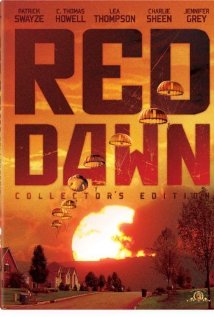 No we wouldn't be able to fight off a full scale foreign invasion with hand guns, we probably wouldn't know what hit us, but in times of civil strife personal guns may help with personal protection and stave off home invasions.

I had that email forwarded to me by someone I knew. First my mouth fell open. Then I laughed a lot. Then I deleted. Is Canada going to send an invading army? Mexico? What are we going to do, attact some would be terrorist with an army of thousands. Get real.

But the kids in Red Dawn don't use shotguns or hunting rifles. They somehow magically obtain rocket launchers, claymores, explosives, machine guns, camouflage gear, assult rifles and unlimited amunition which they can't have looted from the Russians (an activity that the film doesn't show them doing) because, with exception of assult rifles, we never see the Russians using any of these things.

Surely it would never come to guerrilla warfare? Rambos I II III IV V VI VII & VIII would surely see any invaders off long before they got through the steamy jungles of your coastlines.

I've only ever seen one remake that improved on the original, and that was Miami Vice; television series remade as big-screen film. Someone in that production crew knew their onions.

The thought of hundreds and thousands of hunters wandering around armed is fearful enough for me!
Jane x

Linda-It's sad that the biggest threat to our safety comes from our own populace.

Joanne-It never occurred to me that anyone would think that Minnesota and Wisconsin would be armed against an invasion from Canada! We wish we could BE as nice as Canadians!

Owlwood- Ah yes, but the steamy jungles on the coasts offer scant protection to those of us figuratively hunkered down beneath the Canadian border--Rambo not withstanding!

Anonymous-I haven't seen the film since 1984 and it's not worth watching a second time. (Why don't you have an identity?)

Jane and Chris- Recently, a little girl was shot in the leg as she was walking into church. The bullet was fired in a wildlife area a quarter of a mile away.

What an odd idea that they chose North Korea as the enemy. Clearly, they wimped out of making it China, the only enemy with enough power and resources to invade the U.S.

As the poor Syrians and Libyans before them learned, you can't fight an equipped army with small arms.