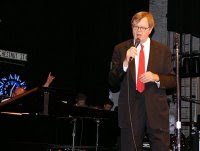 I read online today that my dear friend, Garrison Keillor, is in the Mayo Clinic where he's being treated for a minor stroke. They say he should be OK and back to work pretty soon. Now I admit that he doesn't know who I am, but nevertheless he is a very dear friend of mine.
When I was a kid, I always thought that Minnesotans were the most bland, average people in the country. We didn't have any exceptional ways about us and we talked plain--not with exotic accents like the people from New York or the South. We didn't put on airs when it came to cooking or fashion. We traded hotdish (casserole to non-Minnesotans) recipes and dressed from the Montgomery Ward catalog.
But then, Garrison Keillor took a step back and took a good look at Minnesotans and noticed that we were sorta different in a folksy way. And don'cha know, we slowly became just a little bit more special as a result.
In 1987, Howard Mohr, one of the writers for Garrison's Prairie Home Companion radio show, published a book called How to Talk Minnesotan--A Visitor's Guide. I laughed out loud as I read the humorous bits about how my folks, relatives and other Minnesotans all talked. I remained smugly certain that I do not have an accent, however--at least not like the folks in the movie Fargo.
It has been such fun listening to Garrison Keillor's shows. I love the warmth and gentle humor and the fact that there is something just a little bit extraordinary about being from Minnesota.
So be well, Dear Friend!
Posted by Ms Sparrow at 5:10 PM

Here's hoping he recovers quickly, and finds more fodder for his gentle humor.

My husband used to own an island up in the Boundary Waters, and somehow Keillor had a place up there too, or something...Minnesotans seem very nice...yes, y'all talk FUNNY...LOL...

That's MONKEY WARDS to you!