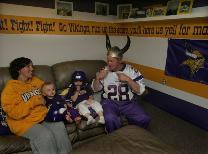 In today's morning newspaper, there is a feature story on football fanatics who are into extreme decorating. This picture was shown on the front page of the Variety Section to illustrate the story.
I have no problem with going overboard for the home team--I'm sure it's loads of fun. However,I have a big problem with misspelled words or incorrect grammar on signs etc. So, when I saw the poster bordering the room with the Vikings fight song (Skol Vikings), the line, "you'll here us yell" leapt right out at me.
How embarrassing for those folks! The error has been publicized and distributed all over the state of Minnesota. They will surely take a lot of ribbing over that.
OK, but it doesn't rank with a legislator publicly yelling "You lie!" at the President.
It doesn't rank with a tennis player yelling obscenities and threats at an official.
And it doesn't rank with an entertainer rushing the winner of an award, grabbing the microphone from her and yelling that someone else should have won.
(And how about all the town hall meetings where elected officials have been verbally assaulted by hordes of yelling protesters and nothing was accomplished?)
Every one of these incidents have been in the news recently. Where has common decency gone? It seems to me that "If you have to yell it, you probably shouldn't say it!"
Posted by Ms Sparrow at 10:54 AM

Common politeness is hard to find. Most times, people are rude and/or indifferent to others around them. Case in point, going to the grocery store and the checker and the bagger are carrying on a conversation without so much as a Hi ! And, when you ask a question, they act like you're the rude one !! GRRRRRRR