Would you read Shakespeare's blog? 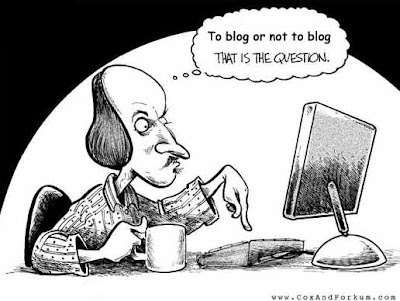 What would Shakespeare blog about? Probably international gossip about the royals and world politics. He might well become a TV pundit--riling up the populace with heavy-handed conspiracies, dramatic revelations and dark dealings in government. He would be wildly popular.

I, on the other hand am a lightweight (metaphorically speaking), and deal in recipes, family stuff and things that bug me. Fortunately, there is room online for everybody.

I have a dirty little secret--I've never been a fan of Shakespeare. Even though I was an English major and studied the Bard, I never found that unique passion for his works that many others do. I don't get what the fuss is about. I sometimes wonder if it might be that he wrote in the same Elizabethan English that the King James version of the Bible was written in. That would certainly lend a lot of weight to the words.

Believe me, I'm not in competition with the great Shakes. I just have a real blind spot when it comes to having insight into what other people see in his writings. I guess I'm to be pitied.
Posted by Ms Sparrow at 10:23 AM

To be or not to be, Mary Higgins Clark or Stephen King. Shakespere, not my cup of tea.

They say Shakespeare wrote for the masses, so if he were writing today, he'd probably be right up there with Stephen King!