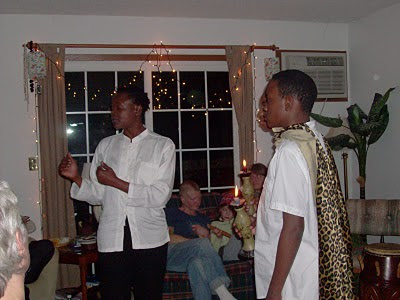 The neighbor guy PT, has an adopted son, NK whose parentage is from Kenya. The boy's birth mother (Z, pictured above) wanted the boy, NK to have a traditional circumcision ceremony now that he was 13. The surgery was done at a hospital on Wednesday and the boy's mother arrived from Hawaii on Saturday and started cooking native Kenyan dishes.
The event was Sunday afternoon and what a great party it was! Shortly after my housemate and I arrived, some women friends of PT arrived with native-type drums. PT's family members showed up as well as other neighbors and friends. After we pigged out on the great foods (which I can't remember the name of) the sun was going down.
According to the African tradition, a number of boys would be introduced to manhood at the same time, so NK invited his best friend to go through the ceremony with him. The two boys were dressed in white and had jaguar-print capes tied around their necks. They were led carrying candles into the living room by the Kenyan-born mother as she danced and four of PT's friends expertly drummed. (Z's an entertainer in Hawaii so she drums, sings and dances as well as cooks.)
The two boys were then approached by each individual who gave them words of wisdom in the stead of the native elders. There was a wonderful group of people there--black, brown and white, gay and straight, young and old--that gave the boys words to live by. It was heart warming and educational and best of all, my world just got a little bigger.
Posted by Ms Sparrow at 6:56 PM

That sounds truly wonderful! Very meaningful for everyone there.

I feel blessed that I lived in Nairobi, Kenya, for three years because I got to meet some of the nicest people in the world.

It does, indeed, sound exceptional. It reminds me that we are all members of the same "village." What a great way to spend a Sunday afternoon!

You are lucky and blessed. How fun for you all.

A Voice From Now said...

I remember an adult converted to Judaism when I was in the Army and he was circumcised and for a week or two afterwards walked around almost like a zombie. It was hard to not laugh at him and each excruciating step he took.

In this case it must have been a very special day for the boys.

What a wonderful gathering that was! Learning about other cultures is so fascinating. Lucky you.