I had seen the doe in the wooded lot several times since Memorial Day weekend, but had not seen the fawn. I worried that the fawn might have died or been abandoned. Then, yesterday morning, I sat on my patio watching my herd of three kitties when the lady whose lot backs up on the wooded lot jumped up the retaining wall. She advanced toward me holding her camera and smiling. She came to show me pictures she had taken the previous evening of the doe and her healthy fawn browsing in her garden.

This pretty young neighbor is an Hispanic immigrant but speaks pretty good English. She's an avid gardener and has lots of flower beds, a strawberry patch and various vegetables planted all over.  She laughed as she told me that she had counted 14 roses ready to bloom on her bushes only to find them all eaten the following morning. A tomato plant was denuded and other plants were picked over. Yet, the joy of having these animals so close was so much fun that she didn't mind. She was posting the pictures on her Facebook page for all her friends and relatives. (However, she did talk about buying some fox urine concentrate to spray around the veggies.)

This sweet gal throws stale bread into the woods for the birds and squirrels (as I do) and laughs off the garbage pail raids of racoons, squirrels and crows. She was amazed at the big hole gnawed in the lid of the garbage pail, but didn't complain.

She is my kind of neighbor and I treasure her dearly.
Posted by Ms Sparrow at 2:46 PM 9 comments: Links to this post

A lot of people have called our cool, rainy season this year an English spring. The result is the vegetation in the wooded lot next door is as lush and green as it's ever been. I've mentioned before that the lot is only 15 feet from my bedroom window and is separated by a retaining wall that drops down 4 feet into the woods.

A month ago, I was leaning on my elbows on the table where the cats sit to look out at the birds and squirrels. I do this often for a "pick-me-up". I saw a flash of white behind some tall shrubs surrounding the big black walnut tree. I thought it might be the local white squirrel that I hadn't seen for a while. I kept watch for a while as it moved erratically.  I soon realized why--the white object was attached to a white-tail deer!

The pretty young doe gradually approached the retaining wall and munched away on the weeds and leaves in front of me. She seemed to be aware of me but continued eating, no more distressed than if I were a picture on TV. She eventually moved off to a dark, far corner of the lot where I couldn't see her.

The next morning, I was sitting on my tiny patio with my three cats who were contentedly munching grass. In the stillness of the moment, the doe came slowly walking across the lawn. She stopped about 20 feet away and stared at us. Her white tail flicked nervously but she remained still. Neither the cats nor I made a move. We were a little tableau of watchers. 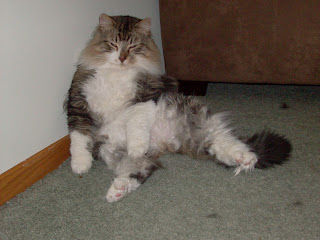 Then Sunny decided he had to check out that big creature. He very slowly advanced toward the doe and actually touched noses with her.(How I wish I had a picture!)  His curiosity satisfied, he came back to the patio. The deer remained unfazed and after determining there was no threat from us, daintily jumped down into the wooded lot and went back to her secluded corner.

The next morning, I was eagerly keeping watch for any sign of her when I spotted the fawn. It was standing on the back edge of the lot all bandy-legged and tiny. What a thrilling moment it was!  The doe's behavior made sense now. Nevertheless, she must have felt we were too close to the fawn and they moved on that night.

We now have a tom turkey strutting around--looking for a harem, no doubt. He will walk past my window going "gobble-gobble" sounding exactly like someone mimicking a turkey.

I absolutely love where I live! I'm surrounded by trees and wildlife on all sides, yet I live only twelve minutes from the State Capital in downtown St Paul.
Posted by Ms Sparrow at 11:16 AM 11 comments: Links to this post

Maybe this will work

After getting a different computer and other technical changes I couldn't begin to understand, I believe I may finally gotten into my blog. Since I don't even know if this will actually post, I'm not going to say much except that I'm doing OK. It really warmed my heart to see all the comments from my bloggie friends while I've been, well--should I say moping?

If this works I'll try to start following your blogs again. I've missed you all!
Posted by Ms Sparrow at 9:40 PM 9 comments: Links to this post