It's a small bloggie world!

I got a nice "blog-buddy" surprise today.

It all started last summer when I was following the blog of ex-New Yorker Mitch Block at Mitchell is Moving. He posted pictures of the frequent religious parades passing his apartment in Sevilla, Spain. At that same time, I was following the blog of Sharon Wallace at The Odd Essay. Sharon and her husband were in Costa Rica and she posted pictures of the religious parade in the little village near where she was staying. I was struck by both the similarities and stark contrasts of the events. 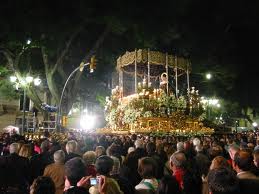 I commented on Sharon's blog that she should take a look at Mitch's blog. After Sharon became acquainted with Mitch's Seville, she decided that she really wanted to visit there. The upshot is that Sharon and her husband have just arrived in Seville and met up with Mitch. She posted pictures on her blog today. 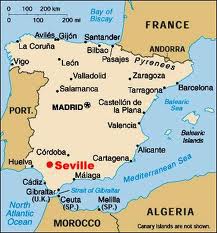 Last January, Mitch had posted pictures of laborers harvesting all of the Seville oranges from the trees that line the city streets. This triggered my memory of reading about Seville oranges on the blog of a sweet English lady at Barbara Blundell's Blog  the previous January. She was waiting for the Seville oranges to arrive at the green grocer so she could make her annual supply of orange marmalade. She said the season was very short so she had to rush to get them before they were gone from her little village store. 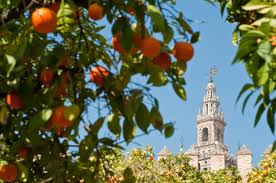 (All photos from Google images)
It's such great fun getting to learn about unique people all over the world and making these connections!
Posted by Ms Sparrow at 2:04 PM

It was a small world, now it's a blog world. Very good.

Ah yes it is a blog world, but I somehow miss more connections with people, but with fuel prices the way they are this is the next best thing.

Funny how people from such far off places can find one another and then meet after a few posts on a blog.
Very cool.

How wonderful! It is indeed a blog world...and there are many nice people, like yourself. Thank you so much for sharing.

What fun. I've met some wonderful people in BlogLand, and then had the chance to actually meet them. It's enriched my life tremendously. I love how I can see the world from my desk chair.

There are so many friends I've met with blogging; I feel just as close as if we've met personally...which I would love to do one day, XOXO

yes, blogging can lead to so many interesting connections...

And it's especially wonderful how you've connected us. I can't wait for my next outing with Sharon and Bill. Hugs to you, Ms. Sparrow!

It is amazing the friendships that sprout up among bloggers. My wife, Patty and I, have been blogging for years (before Blogger offered their blog service) and we have met some outstanding people -- some better photographers than ourselves. My wife used to take some fantastic photos but her camera quit and she would not accept an extra Canon camera that I had, so she has been camera-less for a long time. But we still hear from people who were blogging with us back in the day.

I couldn't agree with you more...Most days I must make time to tune in to my blogging friends, but, it is well worth the effort!

Further proof that it really is a small world and blogs help connect us all. This post made me happy!
xo jj

I love this close knit family and have hopes of meeting up with my blog friends one day--it's on my Bucket List!

Found you from your comment on my GeeZer blog. Thank you. Your posts are warm and friendly and inclusive. I especially like how you pay attention and connect others. Cheers from Bellingham, WA. Rae Ellen Lee, Geezer Girlfriend.

It is indeed. And I've "met" some interesting people all over the world thru the magic of blogging...

Some times people connect in the most unusual ways.

Makes me wonder what we did before blogging took over. What fun. Sue