Yesterday,  it was bitter cold again and the turkeys were all roosting on the branches of a felled tree near the feeding area. They conserve heat and energy that way. 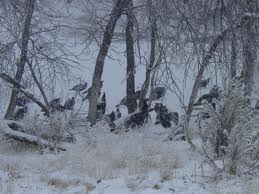 I noticed one big tom suddenly become alert and crane his neck around. Seconds later, the entire bunch simultaneously popped up and jumped to the ground. They were all craning their necks and looking up. When I looked up to see what was causing this alarm, I saw a large hawk perched up at the top of the cottonwood tree. On either side of the hawk were crows loudly cussing out the intruder. This angry cawing of the crows is what tipped off the turkeys to the hawk's presence. 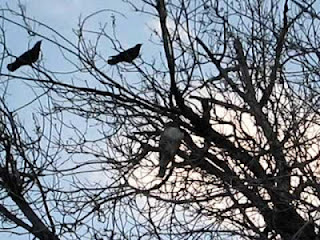 The hawk was no threat to the turkeys who are several times bigger than it is. Yet, they were greatly upset by having it sitting up in their tree. I gave some thought to why they were so threatened and constructed what I think is their history.

When I first spotted them last June, there were nine newly-hatched poults with the mother. She was cautious and I rarely saw them until later in the summer when there were two hens with a combined flock of twelve chicks. When the chicks were all mature, I couldn't tell the mothers from the rest anymore. By early fall, there was only a total of ten in the flock--two hens and eight young.

In late November another undersized hen suddenly appeared, apparently from another flock. This increased their total to eleven. She had an injured leg and always trailed behind the rest as they moved around the neighborhood. Happily, she recovered and walks fine but she's still smaller than the rest of them. It seems that while she's tolerated, she is not fully integrated into the flock.

When I consider all the chicks that went missing over the summer, it seems likely that all of the resident turkeys lost siblings or chicks to hawks and other predators. Their instincts tell them to beware of hawks and that fear kicks in whenever a hawk appears. It will stand them in good stead when they start their own families in the spring. 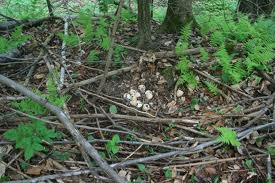 All photos from google images. If you care to read my earlier posts about the turkeys, just click on the label "Turkeys" below and they will come up in reverse order.
Posted by Ms Sparrow at 1:52 PM

You are so observant! I'm sure you are right about hens guarding and protecting the chicks.

I've watched something unfold at the golf course I drive by daily the last ten years. First, Canadian geese overran the course. Then they began having chicks. I saw many yellow fluff balls on the way in. Far fewer on the way home. One day I saw a hawk snatch the last chick.
More chicks were snatched the next year. I wondered if geese would get smart enough to stop laying eggs on an unprotected golf course lawn.
Then the next year I saw the quarter acre at the corner was never mowed. And, I never saw little yellow chicks, but eventually I saw goslings. The course owner had given the hens a "rough" to lay eggs and raise chicks enough to strut out and learn the real ropes of being a goose.

I like reading about your flock of turkeys... we fed the deer & turkeys when we lived on the farm and they were a never-ending source of entertainment. And about those disappearing geese... when we were in Maine, I think the biggest predators of the goslings were turtles or other aquatic critters. Seems like that food chain is highly active at both ends....

During my rehabber days, I used to play the sound of a hawk then birds' alarm calls to orphan birds.They soon got the idea.
Jane x
PS Holding on to the the thought of spring!

I can see why the turkeys would be upset, as the hawk is a predator, regardless of its size. It is freezing here, too, Ms. Sparrow. Take care of yourself. Thanks so much for sharing your photos.

The birds around our pond, when we lived in Connecticut, made a fuss too over predators. The crows are especially noisy alarming anyone who will listen. We should all take heed that wildlife really do take care of each other, XOXO

Seems the turkeys and crows have firmed up a pack of alerting each other to predators, wonderful to observe in nature. I can't even imagine how cold it must be for them.

Really enjoyed reading about the turkeys. I'd enjoy being able to watch them, too. Have a cozy Saturday!

Those crows can be relentless when it comes to hawks!

Joanne: What humane folks must have been running the golf course. I love that there are those people who give wildlife an assist, not to mention those folks like you who notice and appreciate it!

Essay: Wild creatures are so interesting to watch. I remember my kids once watching a mallard duck with her chicks on a pond. One by one the turtles grabbed the ducklings underwater and drowned them. I guess it's snapping turtles that do that.

Jane and Chris: I'm sure that knowing hawk sounds was a lifesaver for those birds. Last summer, I heard a bird sound right outside my office window. I went over to check just in time to see a hawk fly off with a sparrow. It was unbelievably quick!

Linda: It was amazing to see how upset they were. Nothing has ever made them react so powerfully before.

Susan: I read once that crows are very intelligent and have a lot of different sounds. Apparently, a lot of other animals can understand "crow-talk" too.

Linda Starr: The crows used to hang around a lot before the turkeys took up residence in the wooded lot. Apparently, crows have a healthy respect for the big birds. Any assistance they provide is purely unintentional.
Crows just really hate hawks for stealing their young and their food.

Carol Z: I keep a constant eye on the wooded lot. It's not very big but there is an amazing amount of wildlife that hangs out in it.

Mitch: When I was searching google images for pictures with both crows and hawks, there were a lot showing hawks eating crows.
Of course, crows will eat the nestlings of other birds so I guess it's tit-for-tat.

Hello Ms Sparrow,
Enjoyed reading about the turkeys. We feed the birds but only small ones visit- mainly sparrows and bluetits. Occasionally we see a wren and we have a robin who comes everyday for his mealworms

You do get quite a variety of wildlife in your wooded patch, even experiencing the drama.

Barbara: It's only been in recent years that wild turkeys have spread into populated areas. We have some of your English sparrows coming around for food too. Actually, I chose my blogger name for the little darlings.

Janet: I feel so fortunate to be living next to the lot. It attracts so many animals and birds that i"d never see otherwise.

Hawks make me nervous so I can totally understand why the turkeys would be upset.

It so interesting seeing and learning about them from you. THANK YOU

You have such a keen eye for detail, Ms. Sparrow. It was as though I was sitting with you, watching the drama unfold outside. When we lived in Africa, we had two geese who were very good about reproducing. I learned a lot, watching them guard the nest, then introducing their babies to the larger world. In a word, they were ferocious. There were times when I couldn't go in the backyard as the father would come at me if I did.

When I read newspaper stories about how children are abused by some parents, I wish they'd protect their young more like those in Nature do.