Turkeys in the wooded lot (again)

I have been in a winter slump lately and haven't been able to motivate myself to blog. I've posted a lot about the flock of wild turkeys that I've been feeding and observing. I have been wary of becoming too tiresome on the subject. However, it keeps coming up again. 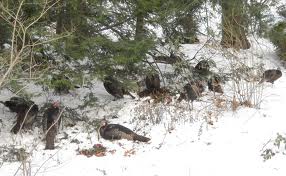 Several weeks ago, a guy who lives four doors down from me in the same complex got mad about it. He came banging on my bedroom window in the early morning and proceeded to yell at me about turkeys (defecating) on his patio. I'm feeding them on the opposite side of the building from him in the wooded lot which belongs to the city.

It's been terribly upsetting. If he'd approached me in a civilized manner it might not have been so bad. As it is, I feel vulnerable and threatened by his outrageous behavior. I contacted the condo association management company about it but nothing has been done so far. This grumpy 55-year-old neighbor lives alone ever since his girlfriend left him because of his bad temper. 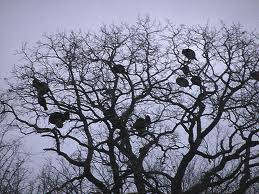 The eleven turkeys keep roosting up in the huge cottonwood tree in the wooded lot every wintry night. Last night it was 0 degrees Fahrenheit and very windy. They flew up to the top of the tree at sunset as usual. During the night, I could see the branches swaying in the wind as they rode it out. I feel so bad for them in this nasty weather that it would be terribly cruel to stop feeding them. 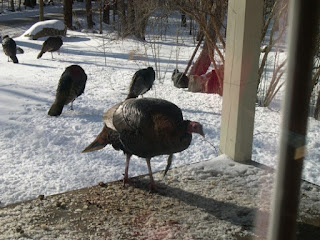 I hope your slump is soon over. Always enjoy your posts. I know what it's like to have an unpleasant neighbor.

Are you sure it's poo. Perhaps it's karma.

Frankly, I'd say to him: go to hell you bastard... but then I'm not a particularly nice person, so... whatever. I really like that you care enough about the turkeys to feed them. So There!

Awwwww....thank you for sharing, Ms. Sparrow. To be honest, I have been in a downward slump as well, which is why I haven't blogged as often as I normally do. So sorry to hear about this unkind and temperamental neighbour. I am sure the turkeys appreciate what you give them and I am sure they are good company. You are very sweet, don't let this man get to you.

Yikes Ms S, it's not nice to have a jerk for a neighbour. It can put a serious kink in your world and how accessible the world is (I know, I've had them too). Don't let his spectre grow until you're in his shadow all of the time. When you find yourself brooding about him turn the thoughts into belittling him. Take practical steps to avoid him, but don't surrender more than a little of your routine.

It's easy for me to say because I'm six foot two and - when annoyed - four foot wide, but keep on at the condo association and at the slightest hint of him overstepping the bounds of civilisation ring the police, put him on their radar, mark him as on the wrong side of the line, have his lead yanked and his kennel kicked. Consciously play the "I'm a lady and he's a %^&** card - use it to make the association and everyone else move and actually do something. There is no shame in doing that, so you need have none. Get yourself adopted by two big, beefy, burly cops who will suggest to him in words of one syllable that he's on thin ice.

You might also mention that he's likely to open his door one day to find two hundred very, very annoyed bloggers who have flown in from around the world and who all want him to "come outside and play wiv us ..."

... and do, please, Ms S, don't let him make you withdraw - at minimum, blog about the twerp. And anyway; we all WANT to hear about the turkeys and snippets of your life, we miss you!

Steps off soapbox and exits stage left, to oil his blunderbuss and choose a pick-axe handle that will get past airport security ...

I love Joanne's comment, that must be your comment the next time he approaches you; I too feel sorry for the birds and went and got a bird feeder when we had the freezing winter. Tell me you are being patriotic to America feeding the wild turkeys and thinking of the first thanksgiving when the Native Americans shared with the pilgrims.

I think Joanne said it beautifully!x ps. If I were not such a ninny about flying I would be on that plane with Owl.

I, too, think Joanne is right.
I do, howvever, also think your neighbor is a sad and angry man.

Aww I love the turkeys! Also, I agree that your neighbor sucks. I hope he finds something else to focus his energy on. I can't deal with people who don't love animals.

Carol: Thanks for your support. Sadly, the world is full of miserable people who take it out on the people around them.

Joanne: I love your remark and it made me smile.

Essay: Oh yeah! I'd love to let loose on the jerk. I have to wonder why he would move to a woodsy area if he couldn't tolerate the wildlife.

Linda: I suppose that the winter doldrums make us appreciate summer more, but it's still not fun. When I take the food out in the early morning, they see me from the top of the tree and make little cooing sounds. I just love that!

Owl: You are my knight in shining armor and noble defender! For the first several weeks I felt like the creep might be prowling around and looking in my windows. I had a hard time keeping it out of my thoughts. I like to keep my windows uncovered to get as much sun as possible but I was feeling anxious and vulnerable. I'm much more settled now.

You are 6'2"? This reminds me of Maggie Smith's remark on Downton Abbey when being served by the new footman who is that height. "Are you really that tall?"

Linda Starr: When I first saw the flock of little turkeys back in June, I fell in love with them. When they had to endure such a hot, dry summer I was impressed that they survived. I've been following them through their first year of life and all the changes they've had to adapt to.
I guess I sorta became a "mother hen".

Elaine: Your support is appreciated--no need to get on a plane. I'm hoping that the culprit will keep his distance from now on. If not, I will be able to get a legal restraining order against him much as I hate to have to do that!

Bob: Yeah, he definitely has social problems and other "quirks". I just hope he's not a gun owner!

Andie: We have so much wildlife to enjoy around here. I feel sorry for someone who can only see the droppings on the patio. I wonder if he isn't actually afraid of the turkeys!

If ,at all you feel unsafe. Call the police.
Funny I was wondering about how your turkeys were faring,and was missing your updates,so I am very happy you posted.Now....somewhere I have a voodoo doll of your neighbour, and a lot of pins just begging for a home!
Jane xx

Jane and Chris: I just went and checked to see what they're doing. They're all hunkered down over in a corner of the wooded lot getting a little sun and trying to keep warm. They don't wander far when it's so cold because it's more sheltered around here. I'll take more food out to them before they go to roost for the night. It amazes me how active the squirrels are. Every time I look, they're tearing up and down the trees like it was a spring day!

I would count you guys a lucky.

Patty and I were in my car and crossed the Stillwater river the other day and it comes to a 3-way stop. We stopped and I looked to the right for traffic and saw a car there stopped and then I saw about 5 or 6 fully grown turkeys. And I had no camera with me.

I'd be thrilled to have a flock in my backyard as I love bird watching be they large or small...:)

Abe and Troutbirder: I feel really privileged to be able to observe them when they come within a few feet of my windows. After all those years when they were extinct in Minnesota, it's a real thrill to be so closely involved. However, the the DNR discourages feeding wild turkeys so when the weather starts warming up and the snow is gone, I'll be giving it up. I can't help but wonder how many little turkeys will be produced this coming summer!

You sure have had your share of turkeys! We'd be on the watch for Turkey Buzzards in the Spring:-D

I am completely on your side, and that man is an idiot. And why do people get their knickers in such a twist over turkeys?! Ignore that jackass and keep feeding the birds. I think they're amazing and I love your photos!

Ms. Sparrow, there was a similar anger situation (but over something else) in our condo complex last year. Remember, you have the right to go before a magistrate and state your complaint. This complaint then goes to the country judge assigned to hear such complaints. Both of you will then go before the judge. The county will pay for your attorney. The one charged pays for his/her own. If the judge deems the situation uncomfortable, the Court will issue a restraining order (class three misdemeanor, I believe) so that the person can't come within so many feet of you. This is what happened here. It worked! Life returned to normal.

If you want a restraining order outside of this means, you have to hire an attorney. The results will probably be the same, but you'll have to pay the attorney.

When the national weather is given, it's easy to see you've had an unusual winter, with today being brutally cold in Minnesota. I seriously doubt that anyone's been sitting out on the patio. Now the poop situation is annoying. However, you feed the turkeys on the opposite side of your neighbor. Something else is drawing the turkeys to his patio.

Bottom line: If you feel unsafe, call the police!

The turkeys are a hoot! I've never seen so many in one place before. How fun.

As for your grumpy neighbor. If he bangs on anything again, I'd call the police. That's totally inappropriate, especially your bedroom window and early int he morning. Sheesh. That's scary!

Hang in there, xo jj

sorry for your slump and your grumpy neighbour...

I'm coming on this late (work seems to be occupying all my blog time). I'm in complete agreement with all the advice given.

The neighbor seems to be an angry man looking for something to vent on. He could use a visit from some uniforms reminding him of the consequences of harassment and trespassing. (The turkeys know and are paying him back in their own way.)

You're graced with the presence of wild creatures, enjoy it. And I personally am not tired of your stories (I just don't comment as much.)