Life seems to be pretty routine in the wooded lot. I go out and feed the eleven turkeys at sunrise when they descend from the top of the cottonwood tree. They make little clucking sounds when they see me come out of the building carrying the big black bowl of food. I've been giving them a mixture of cracked corn (I just bought two more 50-pound bags) bird seed and bread crumbs twice a day. I occasionally add some oats, raisins or chopped apple.

I thought my little flock was all the turkeys in the area. Yesterday afternoon, four older tom turkeys showed up while they were gone. The toms were earnestly displaying their tails and doing a dance as they circled each other. They would stop all at once, stretch their necks out and gobble furiously and then resume the dance.It's really funny to watch. After half an hour, they all left. They worry me because I know they can be mean. 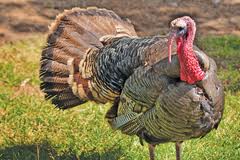 The regular flock consists of six females and four young males plus Priscilla, the small female who joined the flock late in the fall. The young males will do some displaying off and on. They flip up their tails and spread their wings and dance in a circle. They even do it on the most bitter cold mornings! The six females just roost in the branches of the fallen tree with their backs turned toward them, conspicuously ignoring them. Priscilla always roosts by herself on a fallen tree farther away. 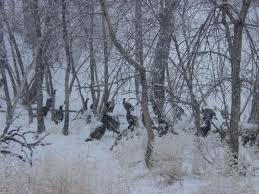 (Image from Google)
I wonder what will happen when Spring comes and all those randy males are looking for mates. I hope they all go off into the woods to raise their families. I sometimes think that I may have gotten myself into a real pickle if they all want to come back next fall.

But then again, I think about Priscilla and maybe by next fall she will have her own little flock and won't be the outsider anymore.
Posted by Ms Sparrow at 8:26 PM

I can tell you tales how all of a sudden we were feeding about 100 Canadian Geese, Mallard and Wood ducks, and a swan or two after starting to feed a few geese that came to our pond. Word travels of the generous humans that are out there! It is fun to watch them and know they love coming around, XOXO

One summer when I was 17 I worked in a zoo which had a 'pet' turkey called Percy. He was huge and he hated women and on more than one occasion I had to flee from this enormously intimidating bird!

When I was a sprog we lived in a zoo in Norfolk for the best part of a year. The zoo had an enormous resident turkey who had the run of the place and he was evil! I remember once my mother and I getting besieged at home by him - Mum had to distract him while I climbed out of a back window and went for the zoo-owner's son, the only human who could intimidate the turkey!

Best of luck when the flock descends upon your doorstep!

Enjoying your pictures. Hope that Priscilla will be all set by next fall.

Oh it warms my heart to hear of you feeding the turkeys, so glad to see them getting some food I only worry they might get too tame and that may be their downfall with hunters.

Don't worry...I think your woods may be the turkey equivalent of a dance hall; turn up...show off a bit...pick a mate then go off into the wide world to raise a family.
Jane x

If they're like all the turkeys here in the park, they will move on come spring. Looking for greener pastures. Although I doubt they could find greener than yours.

I'm jealous. I miss seeing my flock of turkeys. Buddy's presence keeps them away. It's all good, but.... it sounds like you have a lively backyard.

Ah Mrs Sparrow such a kind heart . I love stopping by for the turkey updates, and I love that you named the newcomer Priscilla.

This is precious. I don't have turkeys, but I do have a hodgepodge of birds that descend upon my back yard when ever I put bird seed out.

If I flock of turkeys DID show up, I'm not sure what I'd do. I suppose I'd toss out some extra handfuls...and insure them that, as long as they're gone by November, they won't end up on the Thanksgiving table :)

Awwww...love your photos. I still have this horrible cold, and I want you to know that your post has helped to brighten my day. Thank you!

I need to get some cracked corn so our resident turkeys stop eating all my gourmet bird seed! :) But they are so much fun to watch. I don't often see the males in full display, but when they do it, it's so imrpessive!

I'm amazed that my home town is overrun with wild turkeys...;)

it must be so interesting to have such a close ringside seat on life in the turkey flock...