It's been a week and a day since I last posted. I write posts and then wimp out because I don't have the courage to hit the little orange rectangle that says Publish.

I wrote a rant the other day but backed off because it doesn't seem to fit my grandmotherly persona. I would rebel against the idea that this persona is all I am, but then I worry about getting too far out of character. This would make it seem that I'm pretending to be somebody I'm not or that I don't have the confidence to just say what I want to say and let the chips fall where they may.  I worry about disappointing people who think I'm above what might be perceived as petty annoyances. I aspire to be one of those bloggers who write about nice, safe things.

But darn it, that is not who I am! 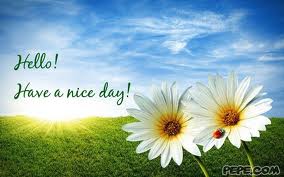 I understand just what you mean. Sometimes after I've set aside a rant I can rewrite it into something more thoughtful. But if you have something to say, go ahead!

If we don't like what you have to say...well,we don't have to read it,do we?!
Jane x

Blissed: I'm glad I'm not the only one with that problem!

Jane and Chris: That is sorta my problem. I worry about offending or discouraging anyone from reading my blog. It ain't much, but it's all I got!

I've done the same thing.... and then I wonder why? Who am I writing my blog for anyway? And... if I tone down my language (doesn't anyone swear when they blog? The "real me" swears like a sailor) I have really strong feelings about many things... but seldom reply to blogs I disagree with... mostly because everyone is entitled to their own opinion ... and their blog IS their blog. I've been blogging less than a year... maybe I don't feel like I've "paid my dues" yet for the privilege of stirring up a hornets nest. ;-)

Your blog reflects you, and I am at least one reader you won't lose if you speak your mind! I tone mine down because it is half for SEO for the business website and half for customers and half for me, but otherwise I'd be on there ranting like a fruitbat ...

You have a whole variety of moods - give 'em vent when you feel like it!

Odd Essay: I don't actually swear much, but I could sure let loose with some derogatory remarks about the jerks who screw up the world for decent folks!

Owl Wood: I love your "toned down"
blogs about the government, banks, Olympics and local drivers. It is indeed a blog-and-a-half!

I had a magnificent boss once who told me "Don't put anything on paper you will regret having someone else read." I've kept that advice close for years and I'm not sorry. That's all the advice I can give.

I say, rant if you want to! It's your blog, after all.

I understand, Ms Sparrow. There's a clue in your comment on the side that makes me think a lot of people feel your rant but remain quiet because the blowback is severe, even nasty, and doesn't accomplish anything, really. I've given this matter thought, but the fact that nothing's accomplished mutes me as well, and this worries me.

I have a suggestion...why not set up a separate blog. They are free, and rant and rave all you want. Just invite those who will understand the ranting and raving! I would be one who would understand...and by all means, give it an outrageous name!

Joanne: I think that sorta zeros in on the problem. If it's something that no one should read, I wouldn't be tempted to rant about it. But, when the "audience" is so widely varied, it becomes a problem of what is suitable within that scope.

Linda Myers: Thanks for the support! It's not that I'm trying to get into controversial subjects, I suppose I'm concerned as coming off as a bad-tempered person.

Linda Starr: I'm probably too timid to risk posting something I'd have to remove. That's why I stick to safe subjects.

Kittie: That may be what bugs me the most. We bloggers set out to express ourselves but then become locked into a certain routine of subjects that eventually becomes confining--and potentially boring!

Meggie: I actually did that some time ago! I set up a blog called Ms Catbird but lost my nerve to use it. I can't find it on google so I guess it was cancelled.

nothing wrong with ranting, though you're right to leave it a while before posting it!

I feel that a blog is where you CAN be who you are...and venting real feelings is always allowed.
We're all nice, but we're all not so nice on certain days, or when discussing certain subjects. We should feel free to express the pros and cons, the good, bad and the ugly. Life is full of all of above. Me, I'm for knowing the real you m'dear...warts and all, I'll still like what you have to say! Amen, over and out.

Safe is overrated!! I go on occasional rants on my blog. Keeping stuff in will kill ya. ;)

Oh, don't worry Ms. Sparrow, you don't have me fooled for a minute. I know how rotten you really are.

OK, admittedly, I'd be really surprised by a negative rant from you. But it would probably be very funny. Anyway, I will stick with you on good and even bad days!

Crafty: I'm not likely to go off half-cocked, as they say, I'm too much of a coward for that!

Corgi Mama: You have a lot more spunk than I do!

Knatolee: I think that's why I'm getting riled up for a rant! Or, maybe I'm just crabby!

Mitchell: Oh, you are so very perceptive, my dear! You made me laugh out loud!

Hmmm, a rant by you, although expected, certainly wouldn't offend. Just be yourself, the whole you -- at least that's what I want to read (sweetness and rants).

By the way, sometimes I don't have time to leave a comment, but I thoroughly enjoy the photos in the upper right corner.