I just spotted the mama turkey over by some trees and all 9 of her chicks are still with her. They look to be half-grown and they're fully feathered now. 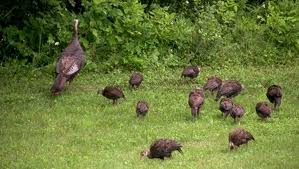 (Borrowed image)
Sunny's vestibular disease has not cleared up. He walks around with his head cocked way over to one side. He get disoriented easily but seems to be dealing with it. I'm still worried about him because that's the kinda gal I am! 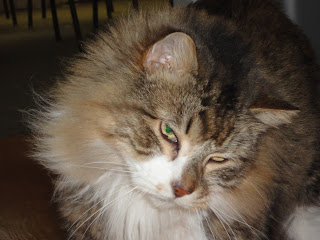 (It seems to have affected his eyes too)
The tomato dumpling soup was not up to expectations. I had previously blogged about how messy and steamy it was to can peaches. As it turns out, making soup from fresh tomatoes is almost as bad! The soup was good but I need a better recipe for the dumplings. I think I'll try it with spaetzle next time! 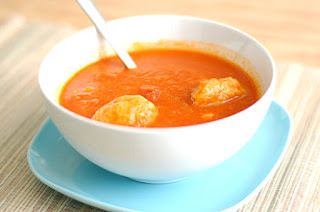 When I went on Google to find a picture, I found this one that had a recipe attached. Now, who would have thought to go into Google Images to find a recipe! 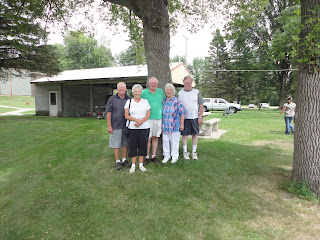 The family reunion picnic on Saturday. My two cousins on the left and me between my two brothers on the right. We look like a bunch of old people!
Posted by Ms Sparrow at 7:13 PM

Aah! Momma turkeys with their babies are so sweet.
Jane x

I have never seen turkey chicks so thanks for the pics.

And as for Sunny, we had a cat that had similar symptoms to Sunny's... only she was older and had had a stroke. She did get around with her head tilted and walked in circles.

Poor ol' Sunny - give him a hug from me please.

Lovely that the turkey babies are doing so well.

Who cares about age? It's wonderful that you have your siblings and still enjoy life! and... Glad the poults survived!

I don't see old people. You all look just like me!

I cannot believe the way photos make me look so old. I wish people could push the shutter properly.

On another note, our BoomBoom's head was similarly cocked for the last half of his very long life, which he also lived with a limp and a pin in his shattered leg.

I miss the turkeys that used to visit regularly. I suppose buddy keeps them from coming by. How fun to be able to watch them, and the babies are so sweet.

I hope your dear kitty is feeling better soon.

Seems like quite a feat for the mama turkey to still have all nine of her babies with her!

How amazing that mama turkey has managed to keep all her chicks, she must be some good mother.

Never saw so many turkey babies, I hope they all do well, the soup looks delicious to me,

so sorry for Sunny, hope he improves with time.

Neat turkey picture. Our turkey get chased off by Baron our GSD into the woods. They seem though to realize he can't follow them into the woods because he is confined to the yard by an electronic fence....:)

I've yet to make a good dumpling! (Which is too bad because they're lovely!)

I love the turkeys! And your kitty. I have a friend with a cat with this disorder, and kitty is doing very well. I also knew a Sheltie with the problem, and she did well for many years. Give Sunny a kiss from me.

And age is a state of mind!

The mom turkey was so cute with her children!