My version of a funny joke

This is a joke I heard years ago that really made me laugh hard. I have taken the liberty of embellishing it with childhood memories of the "olden days".

The ten-party-line telephone on the kitchen wall of the farm house rang. Ma was at the wood burning cookstove stirring a pot of stew for dinner. Her cheeks were rosy from the heat of the oven where six loaves of bread were baking. She wiped her hands on her homemade flour-sack apron as she rushed to answer. Her heart was pounding from the jarring sound as the phone rang again--one long and two short.

She grabbed the hanging ear piece, held it against her ear as she leaned into the mouthpiece and shouted "Hello?" She had to listen carefully to the faint voice on the other end of the line.  There were clicks as other people on the party line picked up the phone to "rubber neck".

She ignored the eavesdroppers since she often listened in on neighbor's phone calls when she heard their distinctive ring tones. This was partly out of concern that there was an emergency so it wasn't considered more than a little nosy. Ma shouted "Hello" into the phone again to get the caller to speak louder.

It was her brother-in-law, Al calling from town. "Helen, is Arnie around?"

"No, he's out in the field on the tractor." Al's voice was more serious than usual, so she asked, " Is something wrong?"

"Well, we got a call from the Old-Folks Home and Grandpa died this morning. We wanted to let you guys know. So, we all gotta get together and plan the funeral, don'cha know. So, you have Arnie give me a call when he gets in from the field, OK?"

Little four-year-old Jimmy, wakened from his nap by the phone, came walking into the kitchen. He stood there in his stocking feet and bib overalls and announced, "I'm hungry."

Ma picked up the little boy and gave him a kiss on the cheek. She sat him down on top of two Sears Roebuck catalogs stacked on a chair and slid him up to the big round table with a kerosene lantern suspended over it. She stepped into the side pantry and grabbed a jar of homemade applesauce off the shelf. She unscrewed the heavy zinc-coated lid and put a dollop into Jimmy's favorite Mickey Mouse bowl . He dived right in. 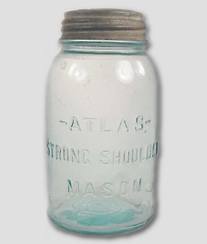 Later, Arnie came in for his noon meal. When Helen told him about Al's call, he took the news of his father's death stoically. The old man had been failing for a long time so it was expected. They talked about how to tell the three kids when they got home from school. Little Jimmy sat wide-eyed, soaking in all the conversation about Grandpa.

When the family sometimes went to visit the old man at the Home, he liked to put Jimmy on his knee. Grandpa delighted in holding his pocket watch against the little boy's ear and watching as he listened intently to the ticking. The visits were usually short because Jimmy's three older siblings would get restless.

The confused little Jimmy finally asked about what happened to Grandpa. Helen and Arnie lovingly explained how God wanted Grandpa to come and live up in heaven with him so God took Grandpa away and that's why he died.

The afternoon was hectic with phone calls and making the arrangements. When 3:30 rolled around, nobody noticed the school bus stop at the end of lane except Jimmy. He saw his three siblings came trudging up to the house. He burst out through the kitchen door with excitement and ran toward them yelling, "Guess what, you guys? God killed Grandpa!"
Posted by Ms Sparrow at 4:30 PM

Nothing like a kid to cut to the chase.

My mom canned with zinc lids, too. She used them with rubber rings on any jar that had a nicked rim.

I read to the end expecting the punch-line to be that the scenario was present-day Lincolnshire!

Out of the mouths of babes!
Jane x

This made me HOOT, which I understand is what one is supposed to do when a Minnesotan tells a joke. But, really, it did make me hoot.

Ha...great story. It really did take me to the days of old.