Minnesota--just a hoot and a holler from Canada.

Corgi Dog Mama mentioned that my last post reminded her of Garrison Keillor's radio show. I've been told that before--but only by non-Minnesotans. Garrison and I are almost the same age and grew up in small towns in Minnesota. We were exposed to the same Norwegian Lutheran influences and staid upbringing. We we were born just one or two generations from our European roots and off of the family farms homesteaded by our grandparents.

There are thousands of us like that. We grew up believing we were innocuous, unremarkable folks who took care of business and tried to be well-thought of.

Thus, it came as a revelation when Garrison Keillor and Howard Mohr (who was a writer on The Prairie Home Companion radio show) began pointing out how truly different we were. In 1987, Mohr published his (locally) famous book How To Talk Minnesotan-A Visitor's Guide. It's a funny book.

Sorry. I'm starting to sound like a Wikipedia article. I guess the upshot of all this is that the moment we discovered we were kinda unique, the uniqueness began to disappear. It always happens that way.

There was a time when "Minnesota Nice" was a common expression. Now the expression is "What ever happened to Minnesota Nice?" (I think we're still pretty nice, though.) 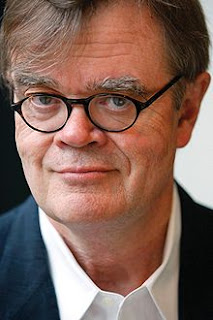 You've always been special to me !! And the grandkids and great granddaughters think of you as " The Bomb " , "Awesome", "The Best Ever". We are lucky to have you in our lives ! I Love You Mom !

I like Garrison so much that I buy red sneakers.

They broke the mold after Garrison Keillor was born, didn't they? I love that guy. Seeing him in person is on my wish list.

And I totally agree...How to Talk Minnesotan is a VERY funny book!

I think you are very nice, Ms. Sparrow. As is a dear friend of mine from MN with a Norwegian background. (She went to Luther.) We were in IKEA once, and I was looking at their frozen fish. She point to one and said, "You don't want to cook that fish. It stinks." I forget the name (didn't buy it) but learned folks your way either love it or hate it.

(And my friend loves your blog!)

Did you ever see the Garrison Keeler/Prairie Home Companion bit about renting/hiring a New Yorker? (For those nice Minnesotans who can't stand up for themselves.) Brilliant. Sadly, I can't find it on Wikipedia.

Cindy: I'd love you even if you weren't my biggest fan!

Joanne: It makes you wonder how red footwear became his signature look.

Cheryl: I always marvel at the way he can see the humor in the mundane things we say and do. His recordings are so funny I laugh out loud! You're right about Minnesota Nice, I just wish there were more of it.

Kittie: Your Minnesota friend may be a bit of a snob when it comes to fish. With all our fishing lakes we can be choosy about which kinds of fish are best--walleye or northerns. Almost everybody goes fishing and has recycled milk cartons full of frozen fish in the deep freeze.

Mitch: No, I've never heard of renting a New Yorker! I would love to hear it. Garrison owns a bookstore here in St Paul called Common Good Books. They sell all of his CD's and books (as do most bookstores). I'm gonna be looking for that one! I read a Keillor quote once, "New Yorkers think Minnesotans are shy because we don't interrupt. New Yorkers interrupt all the time." (I'm sure that doesn't include you.)