Back in the 60's, I had four little kids and a full-time job at night in a factory. My husband worked hard delivering freight during the day. We didn't have a lot of spending money, and pictures (to us) were a luxury. It was expensive to mail off the finished roll of film and wait for the photos to come back. They didn't always turn out and your money may have been wasted on disappointing or useless stuff.

As a result, we didn't take pictures on a whim. It was only for a picture-taking occasion that the camera was brought out. Usually, one picture was snapped, maybe two. The roll of film might be in the camera for a year before it was sent off to be developed.

Then a company started selling low-cost photo film with the price of developing included. This seemed like a good deal to me and I took pictures of my four without a thought about the quality of the film.

Sadly, it wasn't until years later that I found out what a scam it was. It turned out that the company was cutting up old movie film stock and selling it for photos. They were aware that the pictures would fade just as old movies do. The ruse to provide the free developing was because the film couldn't be processed by regular developers.

So, here is a picture I took in 1964 of my sweet little kids. I have so few photos of them during those years that I feel guilty and sad. I wish I could tell off those sneaky people who cheated thousands of families out of their memories! Shame on them! 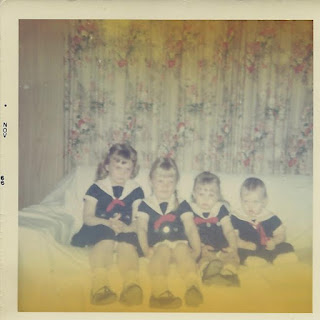 Silly folk pay a fortune for an "app" for their "iPhones" to make photos they take look like that!

Scan 'em all in quickly, highest resolution that you can, before they fade completely...

Four beautiful children! I really like their little outfits, very cute!
I would really love to see some more photos of them, if possible?

Yes I was going to recommend the same thing as owl wood to scan them or take them to someone who can make an internegative and print from those, and nowadays there even more scammers out there, one has to be vigilent all the time it seems.

Our local CVS says they can restore photos. Have you tried taking them in somewhere to see what could be done? I loved your story of harder times. We've all gone through that either as kids, or while raising our own. Rip off artists are out there for each and every generation aren't they? (Commie bastards!)

Thanks for the ideas on preserving the pictures. I will have to do that soon and then make copies for each of the kids to keep.

Even some of my good color film is fading. I should take that same advice, to scan and save them and make copies. Beautiful girls, and I love their dresses!

Beautiful photo! When I think how expensive film and developing used to be. I have only one roll of film from my college graduation and about a thousand pictures of the last few years. Love digital pictures and so thankful for them.