One Saturday night last year, my second daughter called me up. She said her high school senior son had just informed her that he forgot he had to turn in a paper on Monday. He was supposed to go to a concert or production and write a review.

When she checked the newspaper, the only event that would work out time-wise was a Hymn-Sing with Garrison Keillor at a large church in Minneapolis on Sunday afternoon. Since I was a big fan, I was happy to go with them.

I arrived before they did so I staked out a seat in one of the front pews. As the church filled up, it became obvious this was the place to be if you were over retirement age. When daughter and grandson arrived, I laughed out loud at the hang-dog look on grandson. Every fiber of his body was sagging at the prospect of the ordeal.

It didn't help that he was, by far, the youngest person there. (Let me add that he is a super kid, active in church activities and sports--he's now in college going for a nursing degree.)

By the time the singing was to begin, the church was packed. We were holding our collective breaths waiting for the great man to appear. He unassumingly walked out and stood in the main aisle where he made some humorous remarks about pastors and church events--none of which I can remember. He loosely rearranged the congregation by four-part harmony and we started with the first hymn in the handout.

Garrison Keillor really loves singing hymns! He sang his heart out with his eyes closed as he stood in the middle of the aisle to get the full benefit of the voices around him. The singers responded by singing their hearts out. To those of us who grew up with all those old songs as a big part of our cultural heritage, it was great.

After it was over, daughter and grandson went back to their home in the suburbs. Later on Sunday night, daughter called to read me grandson's review of the event. He lamented about the dank smell of the church (which I didn't even notice) and all the old people. Even though he had never heard of Garrison Keillor before, grandson said the congregation greeted him like some kind of Rock Star. Grandson's preconceived notion was that the hymn-sing would be long and boring and it was. He said that as a teenager, he would know what entertainment to avoid in the future. 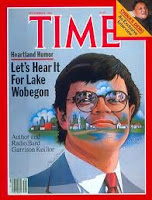 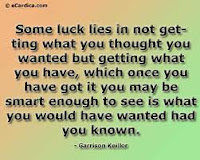 OK, so now I will wear red sneakers in honor of Garrison and your grandson.

Garrison Keillor spoke as part of my goddaughter's graduation and it was probably the best graduation program I've ever heard. We all loved the presentation.

Your poor grandson, not getting the concert!

The concert sounds like great fun to me. I love old hymns and would love to be in a large group singing them. Maybe your grandson will look back some day and remember it very fondly. I'm betting he does. :)

I can just imagine your grandson's discomfort! Garrison Keillor is an acquired taste, I'm sure. When his show is on and I'm in the car, I often find myself sitting there listening until the song or skit is over.

We've been fans for decades. Two years ago, as a mother's day gift, my daughter flew me down to Durham for a long weekend and concert of a Prairie Home Companion which was being broadcast at the same time. It was delightful evening and something I could cross off my bucket list. He does indeed love singing, and is an American treasure in my book!

I used to sing in the choir when I was in school and I loved it, but then again I loved singing. I have never heard Garrison Keillor I'll have to see if there is a you tube of him.

I do not tune Garrison Keillor in that often but it is on sometimes on Sunday in the car radio. I like him and heard him today. I went to Krogers store to buy some coconut oil to try it out in various ways. So far we like it.

It is easy to get myself side-tracked...

I want to also say I enjoyed your story as it is well written and flows easy as you read it.

Thanks for all your comments. I seldom remember to tune in Prairie Home Companion on the radio. It's at an inconvenient time. I really enjoy listening to his CD's in the car on long trips, however. That's the optimum way to enjoy them!