I dropped out of the blogging scene for a month solely out of frustration with my computer. It took hours to read other blogs and I lost heart for continuing the battle.
But then, I made a surprising discovery. Last year, the neighbor guy in the unit above us was unemployed. He was concerned because his son needed the internet to keep up with his schoolwork but he couldn't afford it.
Since my roomie and I shared an internet connection via a router, we told him he could sign onto our signal and use it for free. Were naively oblivious as our internet service became worse and worse.
Then several weeks ago, it suddenly improved tremendously--we could sign on in minutes. The neighbor kid was away at camp that week but when he returned, the service was back to terrible. It was obvious that the problem was with the neighbors. I told my granddaughter's boyfriend about it and he told me that computer games and downloads "suck up a lot of bandwidth".  Thankfully, the guy has a good job now and he's going to get his own internet service.
My sister was visiting all last week and we had a really good time. We did all the thrift stores and favorite area restaurants, like Keys Cafe, Snuffy's Malt Shop, The Good Earth and Mai Village. I think the highlight was when we went to the Pavilion over at Como Park for a community production of the musical, "Oliver". This is her all-time favorite musical (mine is "Fiddler on the Roof"). What was the most fun for her was that there were four songs in the stage version that weren't in the movie version.
During the busy week, we found that our oldest cat, Snuffy was failing. He was holing up under a bed and had messed himself--neither of which he had ever done before. We realized that this was the end of the road for him and took him to a vet to be put down. We brought him home again so the other three cats could see he was dead. I'm not sure how much they understand about the loss, but it just seemed that they needed to know what happened to their companion. 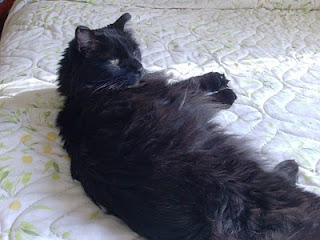 Rest in Peace, little fella.
Posted by Ms Sparrow at 11:39 AM

Well I'm glad to see you back. How awesome that you guys had such a great time....and I'm so sorry about the kitty. That's so hard.

I am so sorry to hear about the kitty...at least he's not suffering or dealing with embarrassing potty issues. Losing a family member is hard. I hope you and the other kitties are taking it alright.

Ps...welcome back to the blogging world! : )

I'm glad you're back, too! And that your connection will no longer impede you.

Glad to hear that the problem was the computer connection, and that it's going to be okay! Sorry about the loss of your cat. I like that you brought him home so the other cats would understand.

Poor kitty. But I know you had given him a good life.

Heavens, I am surprised you could surf at all with a bandwidth-munching teen above you. Wah!

Hi Ms Sparrow,
Glad to see you back and happy that your computer problems are solved ! ! My emails are playing up at the moment and duplicating themselves Sometimes it seems that computers have a mind of their own !
Sorry to hear about your cat.but it's comforting to be able to put a sufferer out of their misery

I am so sorry about your kitty!!Glad you are back!

Yes, welcome back. How sad about Snuffy. It's not easy losing a pet but just thinking that he's not suffering anymore is a bit of a comfort.

You were very kind to share your internet service. Really, that was such a nice gesture. I'm glad he has his own service, now, though.

So now you've given me some great places to visit when I come to the Cities! I haven't been to a play for a long time so the Pavilion would be fun. And I love new eateries so will put these three on my list, too!

So sorry about your cat. I never thought about how other animals would respond when one of them died. It was nice that you thought about that.

You and your sister have it wrong; everyone knows that the best musical is Les Miserables.