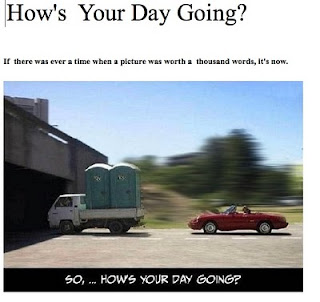 On this past Saturday, I had my very first car accident--I rear-ended a car stopped for a left turn on Larpenteur.  The back end of the girl's car was smashed in and it wouldn't run. It just sat on the median in the rain as she cried.
One month ago, my granddaughter of the same age was rear-ended at a stop sign. Sonja also cried as the information was exchanged and her car towed away. The woman who ran into her didn't have insurance and tried to blame it on Sonja. The car was totalled and it was a nightmare for her.

As a result, I was extra sympathetic to the girl whose car I hit. She said it was her only car and she needed it to get to work. I hugged her and offered to take her to work as we stood there in the pouring rain and passing cars stopped to ask if they should call the cops. Several people who had witnessed the accident had pulled over to give statements to the cops.

When the first officer asked me for details, the girl's mother arrived and rushed over yelling and accused me of trying to kill her daughter. The sweet young girl just sobbed as the cop tried to calm the mother down. I admitted the accident was my fault (which I learned later you should never do) and that I had good insurance. That made the mother back off, however, she insisted that her daughter was in shock and needed to go to the hospital. Several other cops had arrived and called for a ambulance and a tow truck.

It wasn't until later that I thought to check my own car. The hood, bumper and fender were all badly dented but the engine started OK. Except, the fender had been pushed back to the front tire so it rubbed against it. I wasn't far from home so I managed to get back. Yesterday, they towed my car to a body shop and I'm waiting to hear what the damage is. I'm afraid they might total out the car, a 2000 Chevy Impala.

I have no way of knowing how the girl in the other car is doing. I truly hope she's doing OK. I thought I was doing really well until yesterday when I woke up with my mouth covered in cold sores. This is a stress reaction I've had before but never this severe. Maybe it's my body's way of punishing me?
Posted by Ms Sparrow at 10:38 AM

Good Lord, sweet woman, stop it. Everyone makes mistakes. I rear-ended someone once, too. It happens. Your body is not punishing you. Nobody is. It's not easy, not knowing, but don't imagine the worst. Expect the best. It sounds like you responded with Love and caring for the young girl. That's what matters. Big Hug, T

I'm in total agreement with Teresa. You've handled it beautifully.

And, you'll be interested to learn, that this happened to me, as well. Except that I was in Northern California with a rental car and the person I hit was a good friend in a rental car just ahead of me! Her car was not damaged at all...mine was smashed in and I could hardly open the door!

Be kind to yourself. I don't rear end - I back into. As a matter of fact, in the last eight years I have backed out of my driveway and hit a car parked across the street!

Supporting the other driver was a kind, humane thing to do. We should all be so lucky.

I feel for the young girl, but the mother OH MY !! One has to wonder if the girl was crying because of the accident alone, or because of the mother and the reaction she was displaying? Was the girl going to be getting more of a tongue lashing at home?

I had an accident where the guy rear ended me and had no insurance. My insurance covered it, but the agent kept calling to ask if I had heard from the guy or knew how to get a hold of him.

Accidents do happen, and its the nice people that worry. The inconvenience of no vehicle is the worst. You will be fine. But, what stories you will be able to tell !

I'm so glad you are okay and that the young girl seemed to be okay. Accidents do happen. I doubt there are many of us that haven't had one. You admitted that you made a mistake and that is all you can do. We all make them, it's part of life.

Now it's time to just get the car fixed and move on. Nothing you can do about it. :)

Ms. Sparrow, while I hope you never have another accident, you need to practice -- roleplay -- what you will do if so: JUST KEEP SAYING "Let's wait for the cops" and "What a bummer for us."

Those cops were way out of line to let the mom act threatening. That will get her a$$ thrown into jail out here. If the other driver doesn't just shoot them.

It's a crazy world and I'm glad you are okay. Remember, that's why they call them ACCIDENTS, not "purposefuls."

Your insurance agent can let you know if they've requested any funds for medical bills. Cars can be replaced. It sounds like you are both going to be okay and that's what is important.

YOu did the right thing.

And the cold sores? Absolutely stress and absolutely what would've happened to me. Look in the mirror, tell yourself that everything went as well as it could've and then give yourself permission to have a nice little cry if you need to.

No you are not being punished that is your unfounded guilt making you sick; I know I do the same thing, perhaps the police can give you info on the girl to let you know she is ok, the police once did that for me and it make a world of difference on my outlook about the whole incident. You were kind and caring and it was a mistake. If the girl was talking and walking she is probably just fine, just shaken up a bit. so sorry you had to go through all this, bad enough the accident, but then the mother compounded it all.

HI Ms Sparrow,
very sorry to hear of the accident. Hope you are feeling better and the cold sores are healing.
You acted very honourably and couldn't have done more The mother didn't do anybody any good, neither her daughter ,you or even herself and hope she realises this now . Hope you soon get everything sorted out and your car fixed

I'm so sorry to hear about the accident. You didn't do your "side" of the events any harm by being honest -- in rear-end accidents, the person behind is always at fault (unless the ahead person is backing up) so you weren't admitting anything the police didn't already know. They probably found it refreshing that someone took responsibility for a change.

In a stressful situation, you were the change you wish to see in the world -- being responsible, having empathy for others.

I hope your mouth has begun to heal!

You were honest, decent and kind. Accidents happen. I hope you are feeling much calmer and take good care of yourself.