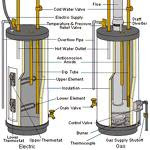 Yesterday my son came over and did a repair job on my ailing hot water heater. Who knew the things were so darn complicated? It turned out that one of the two elements had burned out and the old dip tube had disintegrated. We replaced the dip tube but bits of the old one were floating around inside. It took a lot of man-handling for him to get it cleaned out and to replace the elements. But, we now have oodles of lovely hot water.
This all cost around $100. Not bad when you consider a new one would have cost around $500. We also installed some energy-saving features. Heat traps--the pipes going into the top of the water heater can waste heat by conducting heat away from it. The traps will prevent that. Energy Blanket--this cost $35 but is supposed to cut down on energy consumption by keeping the water hot longer so it doesn't run as much. I'm hoping this will cut down on our electric bills!
Well, enough of flaunting my newly acquired knowledge!
They announced the name chosen for Lily's cub--they are calling it Hope. I'm a little disappointed because there seems to be something rather fatalistic in that choice. Frankly, I liked your suggestions a lot better!
Posted by Ms Sparrow at 4:52 PM

I'm with you on the name Hope.
That name always makes me think that they are trying to counter balance something bad. Oh well what's done id done I guess.

Hark at you being such a smarty pants with the boiler knowledge.

Hope is a pretty name, but I agree, was likely chosen not for its sake but the sake of what "hope" conveys. I thought the other names were prettier, too! And more lively!

Glad the hot water heater is now perking along. Our hard water out here makes them a very short-lived appliance. The blankets DO save energy, so you will be glad you bought one!

I wonder about replacing or fixing an older hot water heater. I have one of those water-on-the-floor devices sitting under ours and when it springs a leak (it is about 13 years old now) I want to see about getting one of those without a tank. It sets on the wall and the water goes through it and makes it as hot as you set it for. There is no hot water stored. Should save a lot of water not to mention keeping the water hot when you don't use it like water heaters do now. I will hope to have enough money to do this. LOL

Hope is a wimpy name in my book, but then again it's not a name I submitted so.... sorry grapes ??

Oh Well, she and Lily are fun to watch. Hope now has her eyes open.

Glad you got the heater fixed. I'm lucky too...my hubby can fix just about anything! Hope is a cute name, but I agree with you....I think they could have picked a better one.

Congrats on getting your water heater up to snuff! I'm with you on the name Hope, also kinda boring. Ms Sparrow, are you sending out Pings? You're now showing up on my blogroller.

This is not the time of year to be without a hot water heater! So glad your son could fix it! He's a handy guy to have around.

Have a great weekend.
jj

Thanks for visiting. I'm so happy to share New York, especially my little corner of it.

I still stand in amazement sometimes that we can have hot water just coming out of the wall (or so it seems). What bliss!

Isn't it great to have someone that can fixed something for you that you can trust!!

Ms Sparrow, please go to my blog and pick up your award. Louisiana Belle just gave me an award with instructions to pass it on to five people (and you now have to pass on to five people!) It's the Over the Top award, to the right. I'm delighted to give it to you.