A trip to HyVee

Okay, a trip to a grocery store is not usually a big deal--and certainly nothing to blog about. However, I am fond of food stores. Wherever I travel, I make it a point to visit a local grocery store and it's always interesting.

On Saturday, my suburban daughter Brenda called and wanted to go to a movie. Since I was dying to see The Martian, we agreed to meet at a theater midway between our locations. Afterward, she insisted on going over to the newly-opened HyVee store in a nearby suburb. She had been there several days earlier and wanted me to see it.

There was a sit down restaurant inside the door and since we were hungry, we decided to give that a try. She ordered a salad and I ordered a side of garlic mashed potatoes and grilled vegetables. The two sides arrived in french fry cups to my surprise. The potatoes were nothing special but the veggies were so good! There were standing strips of carrots, squash, green pepper, onion, etc grilled with herbs. They were so good that I would go back for just that. 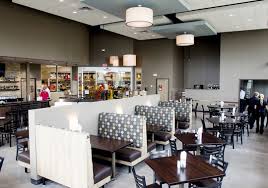 Then we went into the very crowded grocery store which is an experience of its own. All around the outer edges were individual areas for different foods. There was one for everything you could be looking for. I was impressed by the wonderful bakery with artisan breads and baked goodies to die for. There was an old-fashioned meat store that wrapped your purchase in brown paper. There was a cheese shop and an endless array of other areas to browse. I was especially impressed by the large section of British foods (with English candy bars), the natural foods and gluten-free offerings. 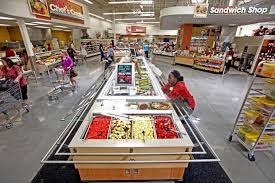 It was like a food court in a mall only with more variety and quality. It's a wonderful place to visit but I'm actually glad that there isn't a HyVee near me so I won't be wanting to go there again very soon. I wouldn't be able to control myself!
Posted by Ms Sparrow at 6:39 PM

That would be a difficult store to get through, no matter how wide the aisles!

I had never heard of HyVee until my first visit to South Dakota in the '80s. They sure have changed since then! This looks like an adventure.

I always thought of HyVee as old-fashioned and rural. Thanks for letting me know they have changed their approach!

I'd heard of HyVee but have never seen or been in one. Now I know to go when my tummy can't hold a crumb more or I'd eat my way through the store. So happy you smiled at the mustard pic. Ohhhhh, but I'm a mustard freak! (And would love to visit that museum!) A couple of years ago we were in some small Vermont village that had mustard tastings, all from the surrounding area. . . couldn't decide which I liked best so bought one of each (3). Anyway, very happy to see you up on the screen! Hope all's been going well your way.

Caught you at Kittie's. That store sounds amazing. Never heard of the company (I'm from Australia). But the products sound wonderful. A grocery trip could take a long time. :-)

I lived in Iowa for 13 years and shopped Hy-Vee but I can say there weren't any Hy-Vee stores like the one you have shown. Looks very interesting, wish I could visit one now.

wish there was one of those here, the gluten free section is getting smaller and smaller and if I ask for a product, no response from them at all. ugh

Have never heard of HyVee
.. but definitely looks interesting.
We shop at Central Market here in Dallas.

I've tried three times to see The Martian but it's always sold out. Hope you enjoyed the movie.

That's some grocery store! I've never seen a market with a sit-down restaurant in it. We have Kroger stores under the "Ralph's" name in Los Angeles. They are nothing great-- at all!

I saw your comment over at Mitchell Is Moving and clicked through to your blog to see it. I found it very interesting, so I will add you to my feed reader and keep reading.

I wanted to speak to something you said - specifically - "I start blogging and before long I feel it's stupid and boring" - Some of my most favourite blogs are the ones where people just share their regular lives with the world. Like this post - I live in Australia. I have never heard of Hyvee, but it looks like a place I would enjoy visiting, so this post is fascinating to me.

I read nearly 700 blogs, I am a fast reader. In the course of my blog travels, I visit every continent in the world. I see outfits people are wearing. I see places people are going. I see food people are eating. I see the gardens, the homes, the kitchens.. hear about books and movies people are enjoying - or not loving. All of this is interesting to me. :) So please never feel like what you are posting is stupid and boring. It will always be interesting to me and to others.

I would love to know what you thought of The Martian. We thought it was one of the best space movies we have ever seen - and I want to go back and see it again, I loved it so much.