I've had many sweet cats over the years but I have never gone out of my way to get one. They just happen.

Late last fall, a woman who lived in an apartment building down the block posted flyers all over the neighborhood for her escaped cats. She was desperate since she was soon moving to Norway and wanted them to stay with her mother.

I contacted Laura and told her they might be in the wooded lot next door. We spoke and I promised her I'd watch for them. Sure enough, there was a black shorthair cat like her Onyx hanging around. (I never saw her other cat.) She brought over a cat carrier, food and a blanket to set on my freezing-cold patio to lure her.

The cat was wary so I put the food over by the retaining wall next to the wooded lot. She would never come to eat until after dark. Slowly, I moved the dish around the corner of the building and onto my patio. The kitty would always appear just after dark so I could time putting out the food before it froze.

This worked well except the cat was so easily spooked that if she caught sight of me watching her she would run away. This went on all through the winter months and into spring. I marveled how hardy she seemed even during the coldest months.

Spring arrived and we started keeping the patio door open so my two cats could lie out in the sun. Slowly, the black cat started coming during daylight and lying a short ways from the patio flirting with my cats. I started talking to her and calling her Pinky (it was obvious by then that she was going to wind up being my cat.) She responded so well that within a few weeks she was eating her food next to my chair on the patio. She was soon coming inside and snoozing on the cat tower and reveling in being loved up.

We took her to the vet for a checkup and shots. That's when we found out we had a male cat and it most definitely was not Laura's Onyx. The name Pinky no longer seemed suitable so we changed it to Tinky--and he's one cool dude! 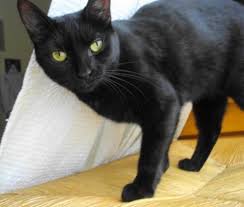 I'm a cat person and still miss Halley 16 years later.... So I love Pinky"s story. I wish Onyx had been found but you did good.... Better than anyone could have expected. We don't have pets now... Our life is too hectic... But I still love cats and still love reading success stories!

Though we've rescued many a cat over the years, I still like to think that they found us.

We don't choose cats; they choose us, so glad he made it through the winter and now you have him all snug and cuddled up in your home.

A Rose is a Rose by any other name, and I am sure that his life is rosy now.

What a great story! You are definitely among the Chosen Few!

Yes that is your cat, he is a beauty, they pick their owners or should I say keepers.
Merle.......

Lovely looking cat, glad he overcame his fear and settled in

We recently adopted a cat from a rescue, but my partner's parents always had cats that 'just happened'!