I am the proud holder of a library card!

I love libraries. Of course I love bookstores too, but in libraries everything is free. You can browse all day if you want. You can relax and revel in being in the company of kindred souls.

I was introduced to the library at an early age. One memorable fall morning, my second grade class was escorted across the street to the imposing Carnegie Library. Around on the right side was a half-flight of stairs leading down into the children's section. We were all seated in a half circle around a tiny woman named Miss Mole (or so it sounded to me) who read us a story book. The book was about a little boy who ate so much, he turned into a balloon and floated away. This concept was confusing and a little frightening but I was enthralled--there were lots and lots of other books in the library with other stories. We were each issued our very own library card so we could come back and check out books again. 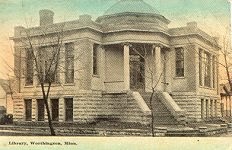 The prestige of being the holder of a library card was pretty heady stuff.  I was hooked!

The adult section was up the outside flight of stairs and we were not allowed to check books out of the adult section until we turned thirteen. It therefore became a "rite of passage" to ascend the steps and be issued an adult library card.

Oh the wonderful things that were to be found in the upstairs library! There were books on archaeology and foreign countries, murder mysteries and science fiction, biographies and even humor! I loved reading so much, I would smuggle books to my upstairs bedroom and read far into the night.

Of course, that old library no longer exists. It was built in an era when nobody gave a thought to providing access to the elderly or handicapped. It also became far too small for a growing population and too expensive to maintain. I'm sure that was the fate of many Carnegie libraries around the country.

But how wonderful that we had those treasures while we did! 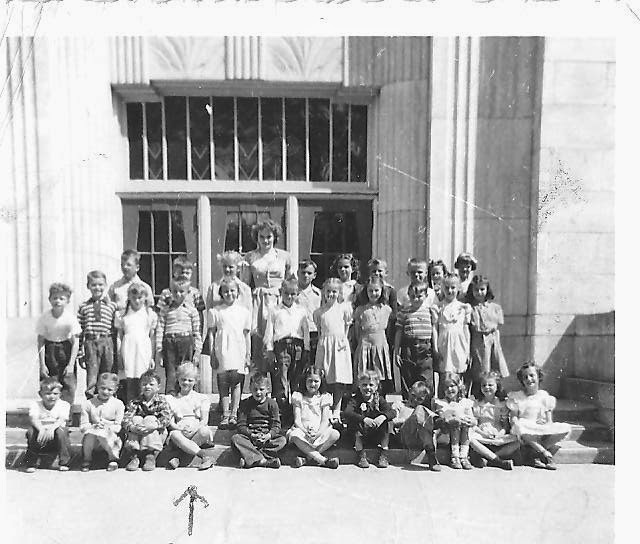 Saturday morning was library day for us.Dad always took us. On my first trip I walked through the doors and couldn't believe how many books there were.It was amazing. I asked my Dad which books was I allowed to read,when he said "any book you like" I nearly fell through the floor, I was so excited.
Jane x

Libraries are so important! I remember that sense of a rite of passage when I got to the age of being allowed into the adult library...

I have fond memories of libraries back then.

Until I was 10, we lived in the suburbs and the bookmobile came around every week. It was magic (like the Wells Fargo Wagon in "The Music Man"). When we moved to the city, the public library was just about a 10-minute walk. I was there several times a week and it was still magic. The first time I was in the main branch of the New York Public Library, I thought I had died and gone to heaven.

My mom read to me a lot as a young child. A rite of passage for me was when she put in on the streetcar from the East Side and I went alone to downtown St. Paul where I met my Aunt Pearl who worked at the National Bank. We went to the downtown Public Library. I remember the circled shelves and the puppet shows there on Saturdays. Bankers including210 my Dad worked Sat. morning in those days. After getting some books Aunt Pearl took me the few block to Bridgeman's on 7th Street. I always got a malt. Those were the days....:)

Jane and Chris: I smiled when I read about your first visit. I had the same feelings.

Crafty: It was almost like being admitted to a secret society, wasn't it?

Linda: They are wonderful places to explore and discover new things on your own.

Mitchell: Wow, I would dearly love to see the New York Public Library. It must be awesome!

Troutbirder: What an adventure that must have been! I've lived in St Paul since 1983 and have never been downtown to the big library. Sadly, there aren't anymore Bridgemans either.

At our library you need only print your name to get a library card. My brothers were five and three when they got their cards, on the same day.

This is so wonderful to read. I too am one that grew up loving the library and spent many an hour there growing up. It is sad that some of the lovely old library building are no longer being used as such.
That old photo is fabulous ~ you in it makes it even more fun !

oh I still enjoy the library and like to read books; I sold or gave away my huge collection of books when we moved from California and still have to hold myself back from getting more, thankfully the library is close by.

What a beautiful, classic library. My first town library was an incredibly musty place in the basement of city hall. But the lady who worked there was very kind and helpful. By the time I started high school we had a nice new library, but I wasn't using the children's section and the other librarians didn't seem very helpful. Now we go to the Ramsey County/Roseville library and it is astonishingly wonderful for kids and adults.

I remember taking my girls to the library all the time; sadly, I haven't been for a long while, but you inspire to look for ours here, XOXO

Hope everything is OK your way...I have missed reading a post from you.