I just realized that our family Christmas get-together is in two weeks. All I've done so far is to set out the little Charlie Brown Christmas tree and buy some calendars. Not a great start!

We got an entire foot of snow yesterday so we're holing up until all the streets are cleared.  While the fluffy white snow makes it very "Christmassy" outside, I'm really feeling bad for the turkeys. Their whole world has turned upside down. They were hatched back in June and grew up over a long, hot summer. When fall came, it cooled down but there was still plenty of foraging and food to be found. This morning, the food I threw out for them was eaten quickly and some of it disappeared into the snow. Confused, they would scratch with their scrawny Tyrannosaurus Rex toes, but it just moved the snow around. 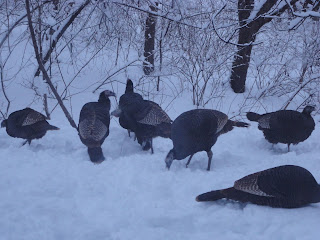 (Turkeys trying to find the food buried in the snow this morning.)
The flock moved on plowing swaths though the snow as they looked for food on neighbor's patios. In desperation, they ate snow. After a time they went up on the slope and just hunkered down trying to warm up. No doubt, eating the cold snow gave them chills and stomach pains. After a long rest they moved on. I'm waiting for them to come back and make me feel better about their miserable lot.

I might getting a little too obsessed over them--God knows there are a lot bigger things to worry about--but these turkeys are right here outside my window. I can hear them making their little clucking sounds as they look for food and I'm not the sort of person who can just look away.
Posted by Ms Sparrow at 11:55 AM

I was wondering about the tree and if it was up . I just broke out the Christmas Cd's myself, and am thinking about the tree. Weird year, hard to get into the swing of things.
The turkeys will be fine, btw , they have you. Just like we kids did !

poor turkeys! That is a lot of snow though...

just around the corner, those turkeys look cold.

We had freezing rain..I skidded along putting out food for the critters...I consoled myself with the fact that the animals are all healthy so will be able to ride out the freezing rain...the same applies to your turkeys.
Jane x

Jane is right. They're tough little birds. Actually, tough big birds and plenty of fat on 'em from your generosity all summer.

I bet the turkeys are hunkered down close by and will be back tomorrow for breakfast. That snow sure makes me feel cold!

If it makes you feel better, we have turkeys shuffling around in snow all winter! They do very well, but I bet they prefer summer. :)

Poor turkeys. Do you have a guest bedroom?

Oh, dear, I'd fret over those turkeys, too. Saw your weather on TV. Wow, what a change from last week.

About Alex -- I rushed to get my car back from the shop. The battery had died, in the garage, thankfully. So, umm, didn't set the post up enough. It was all just a blog fest, a holiday roast.

We had freezing rain and some snow here in Montreal and it resulted in one big slushy mess. Christmas is coming fast, just two weeks away. The turkeys look cold, bless their hearts.

We got our first big snowfall last night as well. Winter wonderland indeed. As long as it doesn't rain on the snow and then freeze our turkeys will be all right. :)

We couldn't either. We bought tons of cracked corn and got bread from the Wonder Bread outlet to supplement when the weather turned cold. People thought we were crazy for interfering with Mother Nature; my thoughts were that we were her helpers!