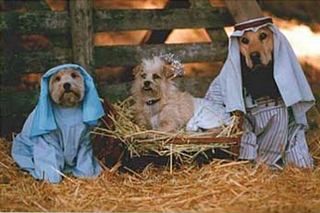 I love goofy dog poses.
We stopped at my middle daughter's home out in the 'burbs to pick up my big stock pot for making matzoh ball soup. We were greeted at the door by all six of the family dogs. It always makes me laugh at their overwhelming exuberance as they jostle for position in the entryway.

The family never set out to have that many animals but things happen. Steve, my son-in-law wanted a lab for duck hunting. He got a female black lab named Reggie from the friend of a relative, but she turned out to be gun-shy. So, he got another big blond lab named Duke for hunting.

The two daughters decided they wanted some small dogs for their own and got a pair of chihuahua crosses and named them Yoda and Dobbie. Daughter Sam was working part-time at a vet clinic and fell in love with an elderly dachshund named Freddie that was abandoned there. She brought the little fella home where he became number 5. (Here's to dachshunds with waggly tails) 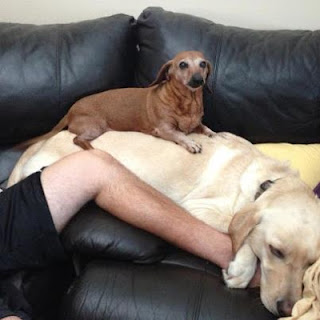 Family dog pile
Just recently, their grandma died  (The beauty of the "surge"). Before her death, my daughter had promised that they would take her dog Ruby after she died. So, poor sheltered Ruby was thrust into this riotous throng. It was a big adjustment for the beagle-cross who was the sole, housebound pet in a quiet home. She was very shy and obese as well.  However, after a few days, Ruby decided that she wanted to join the pack. She now chases rabbits outside and romps with her new canine friends. She has already lost four pounds.

My daughter is a little embarrassed at the number of dogs they have, but she takes it in stride. I'm just happy to get lots of doggie loving when I go over there!
Posted by Ms Sparrow at 3:20 PM

Sorry about the links. I still can't figure out how to do it right!

Sounds like a house full of love! Those lucky dogs! I hope you're having a fine, peaceful day, Janice.

the best holiday family photo yet. happy holidays to you.

Splendid beasts, all! The scruffier and more unfortunate the mutt the more I love them (100 plus a bit)!

Kids and cats and dogs. Perfect!

Awwww....great post and photos, Ms. Sparrow. Wishing you love, peace and joy now and always. Thank you so much for sharing.

This put a big smile on my face. No reason to be embarrassed for loving a dog and giving it a good home, and then doing the same thing again and again!

Biblically perfect!! I needed a good smile today...it's been a rough holiday:-D

Six dogs, how wonderful! :) I am under-performing with two. The more the merrier, i say!

We should all be so lucky to land in a good pack and drop a couple pounds...

Nice to have lots of animals around!

I had four cats when I lived in Nashville. Never started out that way, but somehow...