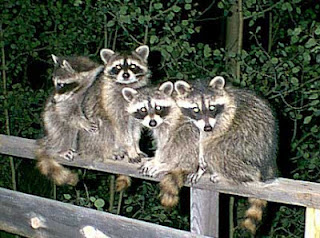 The Baptists had the best solution. They voted the squirrels in as members. Now they only see them at Christmas and Easter.
Posted by Ms Sparrow at 8:08 PM

LOL! This is hilarious...and great! I hadn't heard this before. Thank you so much for sharing and for the smiles. :)

Lovely when it all comes together, isn't it. Trust the Baptists to have the solution. My Uncle would have told this one. My Aunt would have, too, come to think about it. And she was a nun.

I love it! That laughter (which you probably heard in Minnesota) was a brilliant start to my day - thank you.

I suspect that the Japanese will very swiftly come up with a solution, and that the solution will be small, electronic, and all over U-Tube before long. Having seen their television shows with contestants put into the most appalling situations I can't imagine that scruples or dignity will get in the way of dealing with a few (hundred thousand) racoonies!

Great story of the religious history of squirrels!

Raccoons are unbelievably clever. They used to take down, completely empty, and disassemble our "Big Top" bird feeder every night. For a few weeks, we searched our woods every morning to find all the parts, which we would then reassemble. We finally caught on and took it down to store in the garage every night. Hah! (Obviously not as bright as the raccoons.)

Once again we humans create a problem and blame it on the animal.
Your joke gave me a giggle!
Jane x

Linda: It was new to me too.

Joanne: It's great when we have the ability to laugh at ourselves!

Elaine: Since you're out of bed six hours before I am, I slept right through it! Sorry about that.

Owl: I've caught several of those TV shows and they are devilishly ingenious in humiliating contestants. Lord knows what they do to the raccoons!

Captain: Glad you enjoyed it!

Mitch: You are so right. The documentary showed that raccoons who live in cities are getting smarter all the time.

Jane & Chris: True--the only reason raccoons are around is because we moved into their territory, not the other way around.

they look like a troupe of teenage boys up to no good!

John: Boy, you got that right!

Here squirles will eat through car wiring at night and are considered pests. Sadly the natural predator sof coyote, hawk, fox, and bobcat have been all but eliminated or driven elsewhere and hence the squirrels are rampant in their destruction.

We do the humane trap thing on our front porch. The park is two miles away. So far, no returns.

I hadn't heard about raccoons invading Japan! :) We usually have a raccoon and her babies in our upper barn every year. They move on when the babies are big enough and haven't caused any big problems. Our ducks and chickens are in raccoon-proof coops!

Linda Starr: A few years ago, I took the car in for servicing and when the mechanic raised the hood, there were pine cones packed everywhere!

Linda Myers: I'm glad that's working out for you. You must not have "homing squirrels"!

Knatolee: I see raccoons around our place at night. I always have several pans of water out for animals and they need to be refilled in the morning.

Laughed out loud! I'd heard this before but had forgotten the punch line so laughed like I'd never heard the joke. Amazing how humans solve problems, eh?

I'm with Kittie. Big chuckles here in NYC. Thanks!