I read once that in the course of a normal conversation, the talk will naturally come to a stall every twenty minutes. I guess you could say it sorta "re-boots" before it resumes again.

I've come to think this is also true of writing. It seems that I can only keep blogging for so long until I run out of things to say. When I've been reduced to posting photos I found online, it's time to quit for a while. I'm sure you can understand.

I suffer from a severely critical (even ruthless) Inner Critic. My Muse, on the other hand, is a total wimp. So, while I might be inspired to blog about something, the Critic takes the wind out of my sails. As if that's not enough, the Critic destroys my confidence and will to write!

I must admit that I've also been sidetracked by a volunteer project. Then, there's also the looming specter of approaching my 400th post. I don't know why I should find that intimidating, but it's like running toward a high hurdle. So, I'm backing up to take a hard run at it and get past 400 in a blaze of glory--or its meager bloggie equivalent! 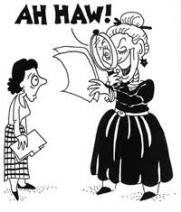 Ms Sparrow you are far too tough on yourself. I enjoy your blog, 400 posts - wow!

PS I also love the photograph of the catnip junkie!

Not to put too fine a point on it Ms Sparrow, whenever you go too long without blogging I order a light-bulb removed on Broadway.

Take a deep breath, stick your chin in the air and go for it!

We're reading! Then I'll have the bulbs replaced ...

I get that way too. But if our friends only like us when we're brilliant and witty, what does that say?

I appreciate your candor.

Blogging's helped me to forget the inner critic a lot more. I did a post yesterday on chocolate covered onion rings. Goofy, but a lot of fun. I wouldn't have done it a year ago. The inner critic would have been lecturing me. Please keep blogging. I always enjoy your posts.

I really understand what yhou're writing here. Try to write just for yourself...without the filters of other peoples thoughts. Don't know if that would work for you or not.

Your blog is unique and special, just what we expect coming from you! Keep the posts coming...and don't be so hard on yourself. I agree though...no critic is as tough on us as ourselves!

I agree, Ms Sparrow, you are far too tough on yourself. Your posts are always insightful. Write ON!

Hmmm, perhaps that restaurant had problems with the olive spread. The spread at Central Grocery is difficult to beat. Perhaps it got too expensive to order or their own spread was too expensive if people didn't order enough of the sandwiches. I find all this very interesting. Thanks for sharing!!!

Well have a refreshing blog break and I look forward to reading your future posts.

I too love the photo of the catnip junkie!

I'm here via John Gray, Ms Sparow. Going back to before your 400th post, I'm intrigued by the notion of flagging in conversation after about twenty minutes. I agree. A friend, a teacher told me that as she looks across the class she sees people's eyes glaze over periodically and then minutes later they seem to come back.

We all need time out before we can as you say re-boot and of course the same applies to writing. It's lovely to meet you and your lively thoughtful blog. I'm from Australia.