The Wheels of Life 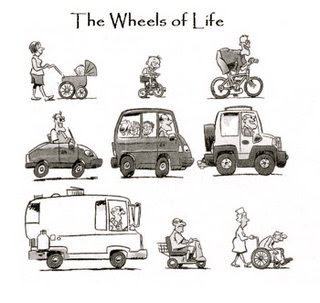 There's probably a female version of this illustration but it wouldn't be much different. I just get a kick out of progressions like this. They simplify complicated sequences to the bare minimum and yet retain the essence of the subject.

I admit to riding scooter carts at the grocery store on several occasions after hip surgery. This would seem to leave me one step away from the wheelchair. I had to skip the RV interval for economic reasons, but it would have been so great! I would have loved to travel all over the country to see what I was missing. I love Minnesota, but sometimes it seems like we're kinda sheltered here.

The only wheels I have now are on a ten-year-old Impala. It has a dent in the passenger-side fender so the door won't open. I've had it popped out several times but it keeps going back in.
The repair will be expensive so I can't even consider it until I get my tax refund.

So, when you stop to think about it, I guess it's money that greases the wheels of life.
Posted by Ms Sparrow at 9:08 PM

That is so darn cute!

My wheels are all the mass transit type. I've never thought about an RV, but I have been thinking about taking the train west. Not sure when, but I do enjoy looking at the Amtrak website.

Enjoyed the Wheels of Life ! thank you !

Nah, it's Love that greases the wheels of life. That and a sense of humor, both of which you seem to have in abundance. Love your organized cats : )

There is. I think somebody sent it to my wife.

Good heavens, this cartoon hits the mark, doesn't it?
I LOVE your cat organization photo on your side bar...what a hoot!

Like you I would love to have a camper van (RV) to travel around the World in. Oh well maybe in my next life.
I once worked at how many years I had spent pushing a pram around, it worked out to 8yrs and 3mths.
I'm thinking of asking God if I can have those years back at the end of my life and get some one to push me around.
I don't know why my bubble wrap thing goes over your text, I have looked at it but it seems ok.
Much love
Lia
xx

That's priceless! Somebody sent me that cartoon on email and I laughed out loud! It's really great and probably true but what the heck...that's life. :-)