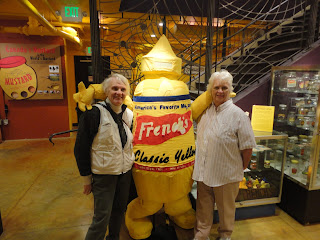 I recently took a trip to Madison Wisconsin to visit my sister.  She took me to the Mustard Museum and it was a lively place. The photo was taken in the lower level.

We also visited the new HyVee store that had opened there. (She was not as enthusiastic about it as I am.) Later we went out to the zoo since it was a nice day. I was looking forward to seeing the chimpanzees that I remembered from a trip some fifteen years ago. They were no longer in the primate house so I asked a Docent why. She said that they only had two surviving chimps and they don't do well in small groups. For their own benefit, the two were sent to the Denver Zoo which has a larger population. I hope they're happy there.

Wow what a great trip, I do love mustard so I am not surprised there is a museum for it. Ha.

I thought my friend Ann took me to every museum or gallery in Wisconsin, but I see we missed one. I like Madison more than Milwaukee; I'll have to be sure we go to the Mustard Museum.

Who knew? Well, I guess those two lovely ladies in the photo knew!